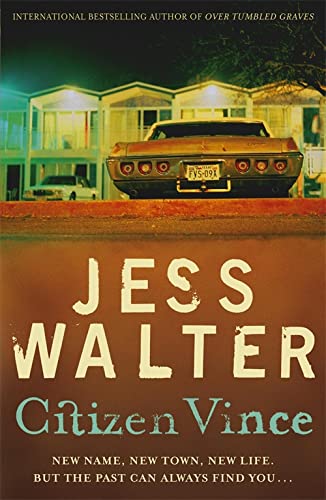 The totally absorbing and evocative new thriller from the writer of OVER TUMBLED GRAVES and LAND OF THE BLIND.

Vince's real name is Marty Hagen. A career criminal from New Jersey, he has been given a new identity in a sleepy Northwest city by the Witness Protection Program. Since he testified against the hoods he used to run with, his rights have been restored - including his right to vote, something he's never done. For Vince, voting in the Presidential election becomes the most important thing in his life - proof that even a guy like him can change.

But while Vince is busy remaking himself, his past arrives in town in the form of a contract killer that he recognises from his old life. Has he come to kill Vince?

With three days left until the election, Vince must duck crooks, cops and an implacable killer, as he tries to figure out a way to save himself, and his dreams.

A suspenseful crime story, a moving love story and a superb evocation of time and place, CITIZEN VINCE is a truly memorable novel from an acclaimed author.

Splendidly entertaining, thoughtful * Sunday Telegraph *
An engrossing page-turning read. * Peterborough Evening Telegraph *
'It's been a long time since I've read a book as compulsively, indeed greedily, as I read CITIZEN VINCE. Here are characters who seem to live of their own volition, who talk out of a terrible inner need to make themselves known and understood, who reveal not just themselves but the yearning heart of our great flawed democracy.' * Richard Russo, Pulitzer Prize-winning author of EMPIRE FALLS *
A tasty novel. Funny, sad, mad, scary ... I liked it a lot. * Independent on Sunday *
I just read Jess Walter's swell [novel] Citizen Vince ... and I realized how much, despite all logic, I'm itching to vote. * Sarah Vowell, author of Assassination Vacation, in the New York Times *
Refreshing ... entertaining ... [with] wry precision and expert timing * New York Times *
Citizen Vince is the book of 2005 for me. . . . a stunning, moving piece of work. * Ken Bruen, author of The Killing of the Tinkers *
Jess Walter [is] a wonderful writer ... Citizen Vince is fast, tough, thoughtful and funny. I loved this novel. * Nick Hornby, author of High Fidelity and A Long Way Down *
It's been a long time since I've read a book as compulsively, indeed greedily, as I read CITIZEN VINCE. * Richard Russo, Pulitzer Prize-winning author of EMPIRE FALLS *
Dazzling ... wry dialogue ... agile prose ... and a finely tuned plot. * Seattle Times *
A nerve-tingling narrative * Manchester City Life *
Utterly inventive ... excruciatingly breathless * Washington Post Book World *
Admirably unpredictable ... always engrossing. Walter's best by far. * Kirkus Reviews *
CITIZEN VINCE is fresh and different - a gritty story of betrayal, and an extended riff on life, death and politics. Walter is a literary talent writ large. * Boston Globe *
This tale of unlikely redemption works because of Walter's virtuoso command of character and dialogue - along with a wicked second-act twist * Booklist *
Intelligently written, bittersweet and thoroughly absorbing. * Seattle Times, on OVER TUMBLED GRAVES *
Jess Walter has just about lapped the field with his superior first novel OVER TUMBLED GRAVES. The suspense and surprises are terrific, but best of all are the characters he has managed to create. * James Patterson on OVER TUMBLED GRAVES *
Walter renders his blind land with a clear-eyed, compassionate vision. * Kirkus Reviews, on LAND OF THE BLIND *
A most accomplished debut. * Sunday Telegraph, on OVER TUMBLED GRAVES *
'Citizen Vince is a brilliant and original crime thriller... [Jess Walter] deserves to be up there with the likes of Elmore Leonard and Michael Connelly.' * Mail on Sunday *
'...a gloriously off-the-wall tale...' * Mail on Sunday, Review *
'Shades of Jim Thompson and the best of classic noir, mixed in with vigorous modern storytelling. It is magnificently told...do not miss this' * Crime Time *
Jess Walter is the author of the highly acclaimed novels LAND OF THE BLIND and OVER TUMBLED GRAVES, which was a New York Times notable book for 2001. He is also the co-author on Christopher Darden's number one bestseller IN CONTEMPT and wrote the non-fiction book EVERY KNEE SHALL BOW. Walter lives in Spokane with his family.
GOR001263270
9780340819951
0340819952
Citizen Vince by Jess Walter
Jess Walter
Used - Very Good
Paperback
Hodder & Stoughton General Division
2005-11-21
304
N/A
Book picture is for illustrative purposes only, actual binding, cover or edition may vary.
This is a used book - there is no escaping the fact it has been read by someone else and it will show signs of wear and previous use. Overall we expect it to be in very good condition, but if you are not entirely satisfied please get in touch with us
Trustpilot