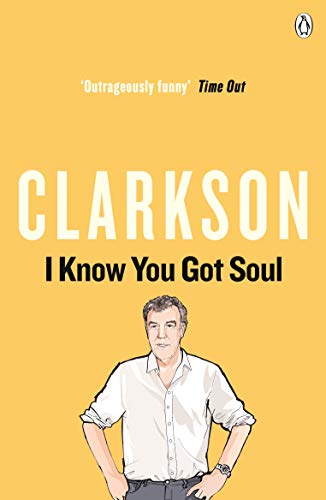 I Know You Got Soul by Jeremy Clarkson

Tells about the machines that the author believes have 'soul'. In this book, the author tells stories of the geniuses, innovators and crackpots who put the ghost in the machine.

I Know You Got Soul by Jeremy Clarkson

In I Know You Got Soul, Jeremy Clarkson writes about the machines that he believes have 'soul'.

It will come as no surprise to anyone that Jeremy Clarkson loves machines. But it's not just any old bucket of blots, cogs and bearings that rings his bell. In fact, he's scoured the length and breadth of the land, plunged into the oceans and taken to the skies in search of machines with that elusive certain something.

And along the way he's discovered:

* The safest place to be in the event of nuclear war
* Who would win if Superman, James Bond and The Terminator had a fight
* The stupidest person he's ever met
* What an old Cornish institution called Arthur has to do with 0898 chat lines
* And how jean-Claude Van Damme might get eaten by a lion

In I Know You Got Soul: Machines with a Certain Something, Jeremy Clarkson tells stories of the geniuses, innovators and crackpots who put the ghost in the machine. From Brunel's SS Great Britain to the awesome Blackbird spy-plane and from the woeful - but inspiring - Graf Zeppelin to Han Solo's Millennium Falcon, they can't help but love them in return.

'Brilliant . . . laugh-out-loud' Daily Telegraph
'Outrageously funny . . . will have you in stitches' Time Out

Number-one bestseller Jeremy Clarkson writes on cars, current affairs and anything else that annoys him in his sharp and funny collections. Born To Be Riled, Clarkson On Cars, Don't Stop Me Now, Driven To Distraction, Round the Bend and Motorworld are also available as Penguin paperbacks; the Penguin App iClarkson: The Book of Cars can be downloaded on the App Store.

Jeremy Clarkson because his writing career on the Rotherham Advertiser. Since then he has written for the Sun and the Sunday Times. Today he is the tallest person working in British television, and is the presenter of the hugely popular Top Gear.

Jeremy Clarkson began his career on the Rotherham Advertiser. Since then he has written for the Sun, the Sunday Times, the Rochdale Observer, the Wolverhampton Express & Star, all of the Associated Kent Newspapers and Lincolnshire Life.
GOR000485242
9780141022925
0141022922
I Know You Got Soul by Jeremy Clarkson
Jeremy Clarkson
Used - Very Good
Paperback
Penguin Books Ltd
2006-05-25
288
N/A
Book picture is for illustrative purposes only, actual binding, cover or edition may vary.
This is a used book - there is no escaping the fact it has been read by someone else and it will show signs of wear and previous use. Overall we expect it to be in very good condition, but if you are not entirely satisfied please get in touch with us
Trustpilot