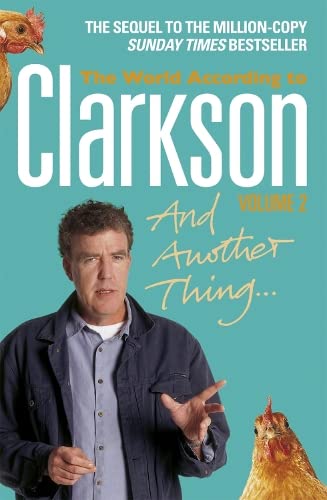 And Another Thing by Jeremy Clarkson

Written by the author of the bestselling "The World According To Clarkson". Here, the hero discovers that: he inadvertently dropped a bomb on North Carolina; we're all going to explode at the age of 62; Russians look bad in Speedos. But not as bad as Brits; no one should have to worry about being Bill Oddie's long lost sister; and more.

And Another Thing: The World According to Clarkson Volume Two by Jeremy Clarkson

Jeremy Clarkson finds the world a perplexing place. So much so, in fact, that he wrote a book about it. But despite the appearance of the bestselling The World According To Clarkson, things don't seem to have changed much. And so Jeremy's having another go. In And Another Thing, our exasperated hero discovers that:

* He inadvertently dropped a bomb on North Carolina

* Russians look bad in Speedos. But not as bad as Brits

* Cooking a Sunday Roast is one thing. Gravy is quite another

* He should probably be nicer about David Beckham

But while these things play on his mind, the world remains Jeremy's favourite place to be. On the whole, it's brilliant. It's just the idiots, meddlers and do-gooders who spoil it for the rest of us. Laugh-out-loud funny and as straight-talking as ever, Clarkson bursts their pointless little bubble, while celebrating the special things that we should hold dear. Sit back and enjoy as Jeremy puts the world to rights ...

Jeremy Clarkson began his career on the Rotherham Advertiser. Since then he has written for the Sun, the Sunday Times, the Rochdale Observer, the Wolverhampton Express & Star, all of the Associated Kent Newspapers and Lincolnshire Life.
GOR008369243
9780718149857
0718149858
And Another Thing: The World According to Clarkson Volume Two by Jeremy Clarkson
Jeremy Clarkson
The World According to Clarkson
Used - Like New
Hardback
Penguin Books Ltd
2006-10-26
336
N/A
Book picture is for illustrative purposes only, actual binding, cover or edition may vary.
The book has been read, but looks new. The book cover has no visible wear, and the dust jacket is included if applicable. No missing or damaged pages, no tears, possible very minimal creasing, no underlining or highlighting of text, and no writing in the margins
Trustpilot