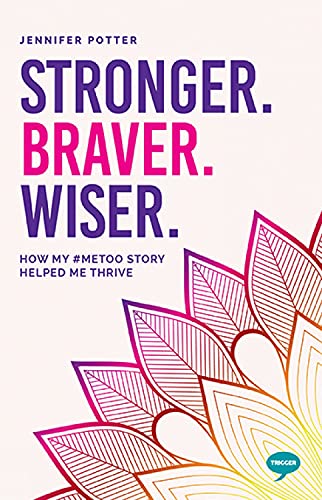 What is it like to face your abuser twenty years after the attack? Jennifer Potter shares her journey from keeping a shameful secret to finding the courage to speak her truth.

Stronger. Braver. Wiser.: How My #MeToo Story Helped Me Thrive by Jennifer Potter

Jennifer Potter might never have said anything. She might have just let everything rest. But after seeing the progress made by the #MeToo movement, she knew she had to speak up. So she told the police about her rape.

At just 17 years old, she was assaulted by a family friend, someone close to her. She told her parents but she didn't report it. Filled with shame about what had happened, she tried to forget about it instead. But trauma leaves scars that can't be seen, and she spent years trying to run away, only to find that she kept running into the very thing she was trying to flee.

And so she chose to file a report, in the hope that she might heal. But revisiting the trauma brought everything back: the memories, the pain, the shame of being assaulted. And being questioned on the stand, 20 years after the attack, was like a living nightmare. Maybe this was all for nothing ...

Stronger Braver Wiser is fundamentally a story of triumph; a real-life David vs Goliath tale of a woman finding her own justice in a world that sought to rob her of it.

Jennifer Potter has been successfully coaching individuals of all backgrounds for more than fifteen years, is NLP practitioner qualified, DiSC certified, and has a degree in Chinese Medicine and Acupuncture bringing together the best of eastern and western wisdom for wellness. She is passionate about finding a way to be authentically you, speaking your truth and living courageously and applies this philosophy to all of her life.In addition to her core work she has spoken publicly at inspirational events, and supports local and national charities to inspire positive change.
GOR009565815
9781912478880
1912478889
Stronger. Braver. Wiser.: How My #MeToo Story Helped Me Thrive by Jennifer Potter
Jennifer Potter
Inspirational Series
Used - Very Good
Paperback
Welbeck Publishing Group
20181022
200
null null null null null null null null null null
Book picture is for illustrative purposes only, actual binding, cover or edition may vary.
This is a used book - there is no escaping the fact it has been read by someone else and it will show signs of wear and previous use. Overall we expect it to be in very good condition, but if you are not entirely satisfied please get in touch with us
Trustpilot