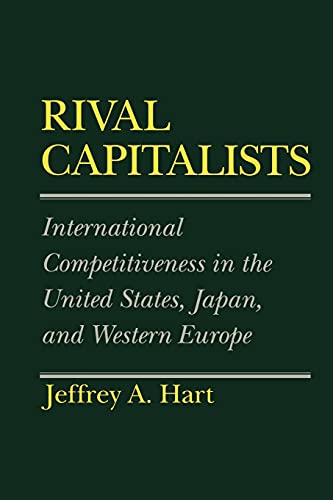 Surveying the development of the steel, automobile, and semiconductor industries in each of these countries, Jeffrey A. Hart illuminates the role of national policy in a changing world.

Nowhere can the cataclysmic reversals in international competitiveness since the Second World War be traced more clearly than in the United States, Great Britain, France, Germany, and Japan. Surveying the development of the steel, automobile, and semiconductor industries in each of these countries, Jeffrey A. Hart illuminates the role of national policy in a changing world.

Hart describes the global structure of production and consumption in the five major capitalist countries and offers a rich comparative history of their industrial policymaking. He concludes that variations in statesocietal arrangements-and the impact these differences have on the creation and diffusion of new technologies-provide the best explanation for divergences in international competitiveness. In Japan, state and business are allied, but labor is marginalized, whereas in Germany, labor and business are allied, and the state is decentralized. Yet both countries have become increasingly competitive because they have developed institutional mechanisms for technology diffusion. France's state-led system, in contrast, is linked with only moderate competitiveness. The decline of competitiveness in the United States and Britain, Hart concludes, may be attributed to state-societal arrangements that have allowed one actor-labor in Britain, business in the United States-to dominate policymaking.

Rival Capitalists will be an invaluable source for policymakers and business analysts as well as scholars and students of political economy, international relations, industrial organization, industrial sociology, and comparative politics.

"The body of the work comprises very good summaries of the ways Germany, France, Britain, Japan and the United States have handled their steel, auto and semiconductor industries. With these comparisons as evidence, Professor Hart argues that differences in national performance are largely shaped by the contrasts in the distribution of power among governments, business and labor.... This is a thought-provoking book, rich in material and clearly written."

* Foreign Affairs *
Jeffrey A. Hart is Professor of Political Science at Indiana University.
GOR003184029
9780801499494
0801499496
Rival Capitalists: International Competitiveness in the United States, Japan, and Western Europe by Jeffrey Hart
Jeffrey Hart
Cornell Studies in Political Economy
Used - Very Good
Paperback
Cornell University Press
1992-11-05
328
N/A
Book picture is for illustrative purposes only, actual binding, cover or edition may vary.
This is a used book - there is no escaping the fact it has been read by someone else and it will show signs of wear and previous use. Overall we expect it to be in very good condition, but if you are not entirely satisfied please get in touch with us
Trustpilot