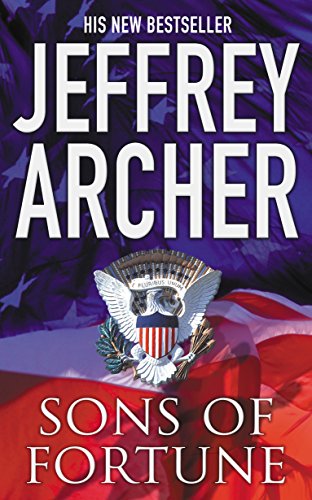 Sons of Fortune by Jeffrey Archer

Bestselling author Jeffrey Archer returns with a powerful tale of twins separated by fate and reunited by desitiny.

Sons of Fortune by Jeffrey Archer

Bestselling author Jeffrey Archer returns with a powerful tale of twins separated by fate and reunited by desitiny.

It is Hartford, Connecticut, in the late 1940's, and a set of twins is separated at birth by a desperate nurse. Nat Cartwright goes home with his parents, a schoolteacher and an insurance salesman. But his twin brother is to begin his days as Fletcher Andrew Davenport, son of a wealthy CEO and his society wife. During the years that follow, the two brothers grow up unaware of each other's existence. Nat leaves college at the University of Connecticut to serve in Vietnam. Returning a war hero, he finishes school and goes on to become a successful bank executive. Fletcher, meanwhile, has graduated from Yale University and distinguishes himself as a criminal defense lawyer before he is elected a senator. As their lives unfold, both men are confronted with tragedy and betrayal, loss and hardship, all the time overcoming life's obstacles to become the men they are destined to be.

In the tradition of Jeffrey Archer's most popular books, SONS OF FORTUNE is as much a chronicle of a nation in transition as it is the story of the making of these two men - and how, eventually, they come to find each other . . .

"Archer provides a fine read with a keen sense of the good and the bad in people and the importance of kinship...[he] masterfully creates a great villian in Elliot, who jumps off the pages in all of his vengeful and shady glamour" -- "Los Angeles Times""One of the top ten storytellers in the world." -"Los Angeles Times""A master at mixing power, politics, and profit into fiction." -"Entertainment Weekly""Archer is a master entertainer." -"Time""Archer plots with skill, and keeps you turning the pages." -"The Boston Globe""Cunning plots, silken style...Archer plays a cat-and-mouse game with the reader." -"The New York Times""A storyteller in the class of Alexandre Dumas...unsurpassed skill...making the reader wonder intensely what will happen next." -"The Washington Post"
Jeffrey Archer, whose bestselling novels span from Not a Penny More, Not a Penny Less to Kane and Abel and The Eleventh Commandment, has sold over 120 million books throughout the world. The author is married with two children.
GOR000525863
9780330413350
033041335X
Sons of Fortune by Jeffrey Archer
Jeffrey Archer
Used - Very Good
Paperback
Pan Macmillan
2003-11-01
608
N/A
Book picture is for illustrative purposes only, actual binding, cover or edition may vary.
This is a used book - there is no escaping the fact it has been read by someone else and it will show signs of wear and previous use. Overall we expect it to be in very good condition, but if you are not entirely satisfied please get in touch with us
Trustpilot