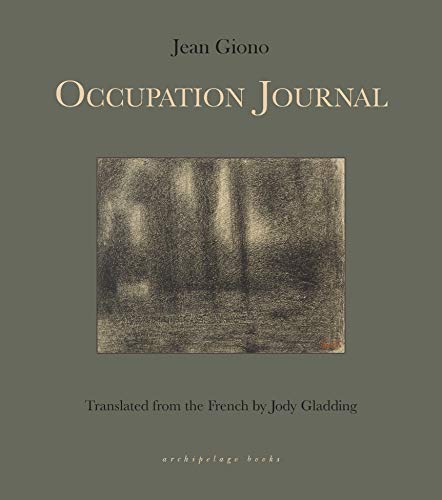 A glimpse into life in collaborationist France during the Second World War.

A renowned writer and committed pacifist throughout the 1930s - a conviction that resulted in his imprisonment before and after the Occupation - Jean Giono spent the war in the village of Contadour in Provence, where he wrote, corresponded with other writers, and cared for his consumptive daughter. This journal records his musings on art and literature, his observations of life, his interactions with the machinery of the collaborationist Vichy regime, as well as his forceful political convictions.
For Giono, literature and reality overlap the way that waves sweep over the shore, one ceaselessly refreshing the other and, in certain wondrous moments, giving it a glassy clearness.--Ryu Spaeth, The New Republic

Giono's voice is the voice of the realist; his accents are the accents of simplicity, power and a passionate feeling for a land and a people that he must love as well as understand.--The New York Times

The journal gives a vivid sense of the French countryside during the war years, the physical beauty of Provence moving through the seasons, contrasted with the fears and unease of occupation. Giono himself, erudite, questioning, refusing to allow himself to be buffeted by the opinions of others or steered off a course he personally felt to be morally right, comes across as courageous and decent, a writer who fell just on the wrong side of the enduring French debate about les annees noires, but who lived to see himself recognized as one of the finest writers on the natural world. - Caroline Moorehead, Times Literary Supplement

Jean Giono's Occupation Journal is a fascinating record of life under Nazi occupation in France, and an insight into the daily reading and writing practices of a dedicated author...To a timely effect, many of Giono's reflections also tackle the problem of isolation, of drawing upon inner resources, and of the consolation of literature...The journals in their entirety compose a captivating account of a sensitive, dedicated writer's quotidian life, and an insight into how he faced both the exterior and interior struggles of his time. - Sarah Moore, Asymptote

The importance of this volume is the depiction of the time with difficulties, unpleasantness and compromises often shown in minute detail . . . visceral and personal, it will raise questions in readers' minds as to how they would or could react in similar circumstances. -- NB Magazine

Curious and wide-ranging, his entries . . . invite delight and interest, covering a broad range of topics at a pace that begs to be savored . . . Occupation Journal is a gem of a historical memoir that includes blasts of beauty, art, and human observation. -- Susan Waggoner, Foreword Reviews

Elegantly translated by Jody Gladding, the book is a fascinating account of ordinary life during extraordinary times...As diary entries offering a captivating portrait of an artist at work, a man under pressure, and a country in turmoil, Occupation Journal is a compelling read. - The National (UAE)

There are certain books you feel you've needed without even knowing whether they exist; and when finally you read such a book, it becomes indispensable to comprehending the most haunting insistences of human experience. I'm speaking here of Occupation Journal by Jean Giono, brilliantly translated by Jody Gladding. This journal is full of harrowing wartime incident, an almost desperate reliance on literature, the severest lyricism Giono needed to chronicle thinking and feeling deeply in a world gone mad. - Howard Norman

Giono's Occupation Journal is a fascinating book. It juxtaposes the intense moral and ethical dramas of a world at war, replete with violence and surrounded by danger, with the inanity of the every day. Despite the war, grandiose dramas play out - scheming and petty neighbours trying to pull one over each other; lovesick servants and farm workers entangled in romantic triangles. All of the everyday comedy and drama of the small French village play out while bombs fall overhead and collaborationist priests are gunned down in their chapels...Translator Jody Gladding does a superb job of it, retaining Giono's nuanced sarcasm and sense of humour. - Hans Rollmann, Pop Matters
Jean Giono (1895-1970) was a novelist, essayist, and playwright, and one of the most prolific and respected French writers of the 20th Century. Born to a modest family in Provence, he was conscripted to the French Army in the First World War, and the horrors he experienced cemented his lifelong commitment to pacifism. His first major literary success came with Colline (1929) which won him the Prix Brentano. He continued to publish novels and political writings during the 1930s, and his strict pacifism led him to be briefly imprisoned for collaboration before and after the Nazi occupation of France. After the Second World War Giono continued to gain success as a novelist, and many of his books were adapted into films. He received the Prince Rainier of Monaco Prize for lifetime achievement in 1953, was elected to the Academie Goncourt in 1954, and became a member of the Literary Council of Monaco in 1963. About the translator: Jody Gladding is a translator and poet. She has published four poetry collections, Translations from Bark Beetle, Rooms and Their Airs, and Stone Crop, which was the winner of the 1992 Yale Series of Younger Poets competition. Her translations from the French include Jean Giono's Serpent of Stars and Pierre Michon's The Eleven.
NGR9781939810564
9781939810564
1939810566
Occupation Journal by Jean Giono
Jean Giono
New
Paperback
Archipelago Books
20200320
200
N/A
Book picture is for illustrative purposes only, actual binding, cover or edition may vary.
This is a new book - be the first to read this copy. With untouched pages and a perfect binding, your brand new copy is ready to be opened for the first time
Trustpilot