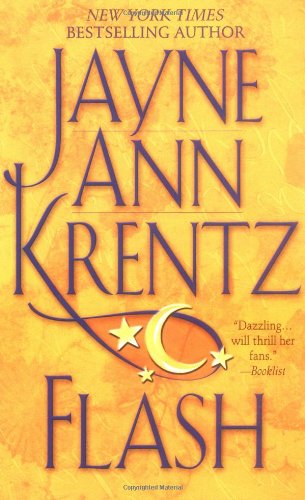 Facing an end to challenges in his life, self-made millionaire Jasper Sloan finds his prospects improving when he inherits the company of his late business associate and is thrown into dealings with the man's niece, Olivia.

Jayne Ann Krentz has delivered pure entertainment in twenty-three "New York Times" bestsellers, including her recent smash hit, "Sharp Edges." Now, her unique brand of electrifying suspense and head-over-heels romance lights up this sizzling thriller -- and sparks a curious chemistry between a self-made millionaire and a charmingly disorganized entrepreneur. They team up to corner a killer -- and find their unruly partnership has the power to set the night on fire....
Olivia Chantry may keep her desk in disarray, but she's a dynamo when it comes to business: her Seattle-based company, Light Fantastic, organizes dazzling events that create the flash her clients need to promote their products or their causes. Her marvelous success has almost made up for a marriage that ended in disaster and left her wedded to a career instead of a mate.
She certainly has enough on her well-sculpted shoulders when she inherits a portion -- 49 percent, to be precise -- of Glow, Inc., her uncle's high-tech lighting firm. But it's the interloper who bagged the other 51 percent with whom Olivia has butted heads: Jasper Sloan, a venture capitalist and dealmaker known as a man with all his ducks in a row, and his neat, orderly life under control.
From the start of their feisty business dealings, the so-called partners nearly crash and burn: they are suspicious of each other's motives. They disagree about management style. They argue about Glow's policy of employing members of the Chantry family, from Olivia's cousin Bolivar to her Aunt Zara, the ex-soap star. But the snap, crackle and pop of their sexual energy can not be denied. Now, their steamy joint venture is headed unmistakably in onedirection: trouble.
As Olivia and Sloan soon discover, a blackmailer is hard at work inside Glow, Inc., uncovering secrets that they both had reason to hide -- and that may come back to haunt them. Suddenly their new relationship faces the acid test of truth...and a need for absolute trust. They might fight each other all the way, but when extortion turns to murder, a union of their minds -- and hearts -- might be their only chance to stay alive.
Sparkling with Jayne Ann Krentz's irresistible blend of sassy wit and sheer suspense, "Flash" explodes into passionate pyrotechnics as a beautifully mismatched pair finds the bottom line isn't making it in the marketplace -- it's the merger of hearts.
GOR001976487
9780671523091
0671523090
Flash by Jayne Ann Krentz
Jayne Ann Krentz
Used - Very Good
Paperback
Simon & Schuster
1999-03-01
432
N/A
Book picture is for illustrative purposes only, actual binding, cover or edition may vary.
This is a used book - there is no escaping the fact it has been read by someone else and it will show signs of wear and previous use. Overall we expect it to be in very good condition, but if you are not entirely satisfied please get in touch with us
Trustpilot