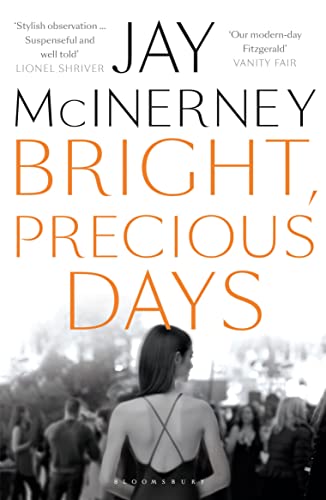 'Stylish observation ... Suspenseful and well told' Lionel Shriver, Financial Times It is 2008 and Russell and Corrine Calloway have spent half their lives in the bright lights of New York. Obama and Clinton are fighting for leadership and the collapse of Lehman Brothers looms. Meanwhile, Russell is running his own publishing company, and clinging to their downtown loft; Corrine manages a charity, and is desperate to move somewhere with more space for their twins. Although they try to forget each other's past indiscretions, when Jeff Pierce's posthumous novel gathers a new cult following, the memory of their friend begins to haunt the couple. Then, with devastating timing, Corrine's former lover makes an unexpected reappearance...
One of the most gifted writers of his generation ... Whatever he does makes fascinating reading * Observer *
No contemporary author quite matches Jay McInerney * Mail on Sunday *
Not only a brilliant stylist but a master of characterization, with a keen eye for the incongruities of urban life * New York Times *
McInerney joins a small number of dissident novelists, headed by Norman Mailer, who change the way we look at American history * Sunday Telegraph *
A scabrously scintillating stylist * Guardian *
McInerney has a gift for the simultaneous perception of the glamour and tawdriness of city life * Evening Standard *
Our modern-day Fitzgerald evokes New York's fading glamour in Bright, Precious Days * Vanity Fair *
The characters in Bright, Precious Days are so well-drawn they leap off the page like great old friends ... McInerney['s] legendary lyrical prose and fierce intelligence are on full display in Bright, Precious Days ... So, too, is his deep humour ... Jay is a very, very funny writer, with passages that are reminiscent of P.G.Wodehouse in their deliciously outlandish humour ... 'a masterpiece' -- Candace Bushnell * Porter *
Mr McInerney's multivolume, not-so-distant historical fiction can't help recalling John Updike's Rabbit Angstrom books or Phillip Roth's second Zuckerman trilogy ... compassion and empathy don't dull a wicked sense of humour ... Mr McInerney has long been celebrated as a social satirist ... a portrait of a marriage in full, its strengths and weaknesses, its betrayals and compromises as vivid as you'll find in any medium * New York Times *
Affecting ... mellow, earnest, almost elegiac. It is intelligent, and knowing in its depiction of certain segments of New York ... McInerney's real subject is happiness, and whether it can survive the batterings of our restlessness and ambition. On this subject, he is mature and humane, offering considered and convincing analysis instead of familiar novelistic tropes ... Refreshingly clear-eyed * New Yorker *
Vivid ... McInerney builds up a multilayered survey of Manhattan shortly before the 2008 crash, and this brings out the best in him ... McInerney's playful set-piece scenes of social observation are memorable ... Polished and diverting * Literary Review *
McInerney's fiction can't help recalling John Updike's Rabbit Angstrom books or Philip Roth's second Zuckerman trilogy ... The Calloway books share strengths with all those works, as well as an underlying spirit that is McInerney's own * Scotsman *
McInerney's skill is in his unobtrusive deployment of the free, indirect style, inhabiting his characters' sensibilities ... The seismic rumble of oncoming financial disaster is augured in deft touches ... McInerney is good on the fine gradations that lie in the upper reaches of the US class system ... He has a sensitive ear ... The novel is well stocked with expertly handled set pieces * Times Literary Supplement *
Stylish observation ... Suspenseful and well told -- Lionel Shriver * Financial Times *
Vivid ... McInerney builds up a multilayered survey of Manhattan shortly before the 2008 crash, and this brings out the best in him. Everything is seamlessly woven into Russell's or Corrine's experiences ... McInerney's playful set-piece scenes of social observation ... are invariably ... memorable * Literary Review *
I sped through it with relish ... an eye for the ridiculousness and an infectious sense of fun * New Statesman *
Those of us who enjoyed the first two books will find pleasure in receiving news of old friends, especially of their failures and misdeeds.Bright, Precious Days provides plenty of both ... McInerney is generous with satirical vignettes of New York excess * Irish Times *
Jay McInerney came to prominence in 1984 with his first novel Bright Lights, Big City. He is the author of six further novels: Ransom, Story of My Life, Brightness Falls, The Last of the Savages, Model Behaviour and The Good Life, two short story collections, and three non-fiction books on wine, one of which was the acclaimed A Hedonist in the Cellar. He writes a wine column for Town and Country and is a regular contributor to the Guardian, the New York Times Book Review and Corriere della Sera. He lives in Manhattan and Bridgehampton, New York. jaymcinerney.com / @JayMcInerney
GOR008688265
9781408876558
1408876558
Bright, Precious Days by Jay McInerney
Jay McInerney
Used - Very Good
Paperback
Bloomsbury Publishing PLC
2017-09-07
416
N/A
Book picture is for illustrative purposes only, actual binding, cover or edition may vary.
This is a used book - there is no escaping the fact it has been read by someone else and it will show signs of wear and previous use. Overall we expect it to be in very good condition, but if you are not entirely satisfied please get in touch with us
Trustpilot