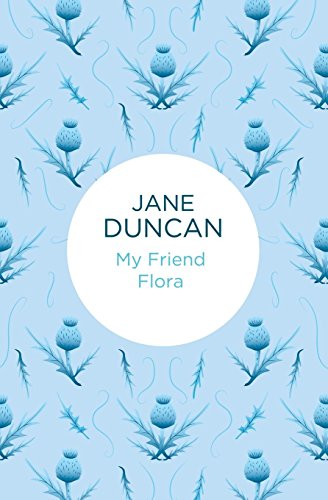 My Friend Flora by Jane Duncan

My Friend Flora by Jane Duncan

My Friend Flora is set in the 'Reachfar' country-the Black Isle in Rossshire-where the narrator, Janet Sandison, spent her childhood and which was the setting for the first of Jane Duncan's enchanting books, My Friends the Miss Boyds. The same marvellous sense of the countryside and its people gives its colour and warmth to the story of Flora 'Bedamned' and her family.

Flore and the other Bedamneds (the bye-name, inherited from Flora's great-grandfather, is strikingly apt) first impinge on Janet's life when, at the age of five, she goes to the village school in Achcraggan in 1915. Jamie Bedamned and his forbears have cast their own special and sinister blight on the countryside for generations-morose, black-browed, independent, ill-favoured craftsmen better suited to the construction of dark, satanic mills than the bridges and buildings of the Highlands. But Flora's bedamnedness is of a more passive nature. When her mother dies, she leaves school to bring up her younger brothers and sisters, including the terrifying Georgie, and to keep house for her curmudgeonly old father.

Janet, George and Tom and, in particular, Janet's young aunt Kate battle to improve the lot of the patient-maddeningly patient-Flora, a natural-born doormat. But in the end it is Flora who turns the tables on her would-be benefactors and is the means of bringing unexpected happiness to the Sandisons of Reachfar.

My Friend Flora is without doubt one of Jane Duncan's finest books.

Born in Scotland in 1910, Jane Duncan spent her childhood in Glasgow, going for holidays to the Black Isle of Inverness. After taking her degree at Glasgow University she moved to England in 1931, and when war broke out she was commissioned in the WAAF and worked in Photographic Intelligence.

After the war she moved to the West Indies with her husband, who appears as 'Twice' Alexander in her novels. Shortly after he husband's death, she returned to Jemimaville near Cromarty, not far from her grandparents' croft which inspired the beloved 'Reachfar'. Jane Duncan died in 1976.

GOR011951591
9781447297765
1447297768
My Friend Flora by Jane Duncan
Jane Duncan
My Friends...
Used - Very Good
Paperback
Pan Macmillan
20150827
226
N/A
Book picture is for illustrative purposes only, actual binding, cover or edition may vary.
This is a used book - there is no escaping the fact it has been read by someone else and it will show signs of wear and previous use. Overall we expect it to be in very good condition, but if you are not entirely satisfied please get in touch with us
Trustpilot