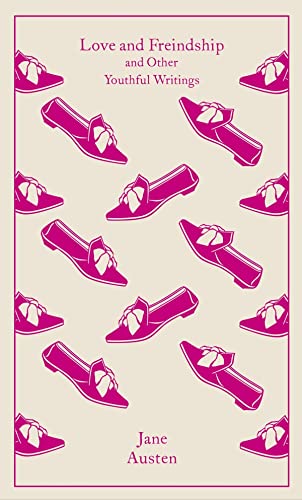 Love and Freindship by Jane Austen

Features Jane Austen's brilliant, hilarious - and often outrageous - early stories, sketches and pieces of nonsense. This edition includes all of Austen's juvenilia, including her 'History of England', and the novella 'Lady Susan', in which the anti-heroine schemes and cheats her way through high society.

Love and Freindship: And Other Youthful Writings by Jane Austen

Jane Austen's earliest writing dates from when she was just eleven years, and already shows the hallmarks of her mature work: wit, acute insight into human folly, and a preoccupation with manners, morals and money. But they are also a product of the eighteenth century she grew up in - dark, grotesque, often surprisingly bawdy, and a far cry from the polished, sparkling novels of manners for which she became famous. Drunken heroines, babies who bite off their mother's fingers, and a letter-writer who has murdered her whole family all feature in these very funny pieces. This edition includes all of Austen's juvenilia, including her 'History of England' - written by 'a partial, prejudiced, and ignorant Historian' - and the novella 'Lady Susan', in which the anti-heroine schemes and cheats her way through high society. Taken together, they offer a fascinating - and often surprising - insight into the early Austen.

This major new edition is the first time Austen's juvenilia has appeared in Penguin Classics. Edited by Christine Alexander, it includes an introduction, notes and other useful editorial materials.

Jane Austen was born on 16 December 1775 at Steventon, near Basingstoke, the seventh child of the rector of the parish. In her youth she wrote many burlesques, parodies and other stories, including a short epistolary novel, Lady Susan. On her father's retirement in 1801, the family moved to Bath, and subsequently to Chawton in Hampshire. The novels published in Austen's lifetime include Sense and Sensibility(1811), Pride and Prejudice (1813), Mansfield Park (1814) and Emma (1816). Persuasion was written in a race against failing health in 1815-16, and was published, together with Northanger Abbey, posthumously in 1818. Austen died in Winchester on 18 July 1817.

Christine Alexander is Scientia Professor of English at the University of New South Wales and general editor of the Juvenilia Press. She has published extensively on the Brontes and has co-edited the first book on literary juvenilia, The Child Writer from Austen to Woolf (2005).

'Spirited, easy, full of fun, verging with freedom upon sheer nonsense...At fifteen she had few illusions about other people and none about herself' - Virginia Woolf'

Spirited, easy, full of fun, verging with freedom upon sheer nonsense . . . At fifteen she had few illusions about other people and none about herself -- Virginia Woolf
[Her] inspiration was the inspiration of Gargantua and of Pickwick; it was the gigantic inspiration of laughter -- G. K. Chesterton
Jane Austen, the daughter of a clergyman, was born in Hampshire in 1775, and later lived in Bath and the village of Chawton. As a child and teenager, she wrote brilliantly witty stories for her family's amusement, as well as a novella, Lady Susan. Her first published novel was Sense and Sensibility, which appeared in 1811 and was soon followed by Pride and Prejudice, Mansfield Park and Emma. Austen died in 1817, and Persuasion and Northanger Abbey were published posthumously in 1818.
GOR006911656
9780140433340
0140433341
Love and Freindship: And Other Youthful Writings by Jane Austen
Jane Austen
Penguin Clothbound Classics
Used - Very Good
Hardback
Penguin Books Ltd
2014-09-25
512
N/A
Book picture is for illustrative purposes only, actual binding, cover or edition may vary.
This is a used book - there is no escaping the fact it has been read by someone else and it will show signs of wear and previous use. Overall we expect it to be in very good condition, but if you are not entirely satisfied please get in touch with us
Trustpilot