Tangled Up in School Jan Nespor 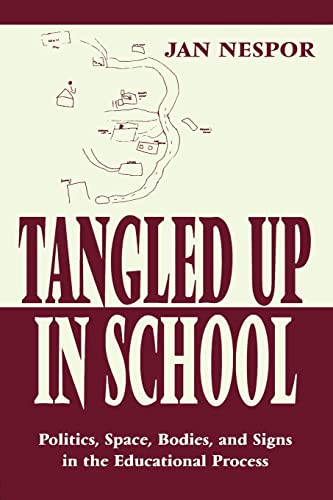 Tangled Up in School by Jan Nespor

Based on two years of ethnographic fieldwork in an urban elementary school, this volume focuses on the webs of social relations that embed schools in neighbourhoods, cities, states, and regions. It raises questions such as what we mean when we talk about "school".

Tangled Up in School: Politics, Space, Bodies, and Signs in the Educational Process by Jan Nespor

Based on two years of ethnographic fieldwork in an urban elementary school, this volume is an examination of how school division politics, regional economic policies, parental concerns, urban development efforts, popular cultures, gender ideologies, racial politics, and university and corporate agendas come together to produce educational effects. Unlike conventional school ethnographies, the focus of this work is less on classrooms than on the webs of social relations that embed schools in neighborhoods, cities, states, and regions. Utilizing a variety of narratives and analytical styles, this volume:

* explores how curriculum innovations are simultaneously made possible by and undermined by school district politics, neighborhood histories, and the spatial and temporal organizations of teachers' and parents' lives;

* situates the educational discourse of administrators and teachers in the changing economic and political climates of the city;

* analyzes the motivations behind an effort by school and business proponents to refashion classrooms within the school into business enterprises, and of children's efforts to make sense of the scheme;

* examines the role of the school as a neighborhood institution, situating it at the intersections of city planners' efforts to regulate city space and children's efforts to carve out live spaces through out-of-school routines;

* contemplates the meaning of school as a site for bodily experience, and looks at how patterns of space and control in the school shaped children's bodies, and at how they continued to use body-based languages to construct maturity, gender, and race; and

* investigates the school as a space for the deployment of symbolic resources where children learned and constructed identities through their engagements with television, comic books, movies, and sports.

Tangled Up In School raises questions about how we draw the boundaries of the school, about how schools fit into the lives of children and cities, and about what we mean when we talk about "school."

"Tangled up in School has moments of sheer brilliance in its capacity to highlight the links, flows, and intersections between school and society....essential reading for all teachers who want to and need to engage more effectively with the changing world of public education."
-American Journal of Education

Contents: Preface. Introduction. Adults at Elementary School. A Tangle of Cities, Corporations, and Kids. Neighborhood Intersections. Intersections of Bodies and Spaces at School. Intersections of Kids, Signs, and Popular Culture. Loose Ends. Fieldwork as an Intersection. References.
NLS9780805826531
9780805826531
080582653X
Tangled Up in School: Politics, Space, Bodies, and Signs in the Educational Process by Jan Nespor
Jan Nespor
Sociocultural, Political, and Historical Studies in Education
New
Paperback
Taylor & Francis Inc
1997-08-12
278
N/A
Book picture is for illustrative purposes only, actual binding, cover or edition may vary.
This is a new book - be the first to read this copy. With untouched pages and a perfect binding, your brand new copy is ready to be opened for the first time
Trustpilot