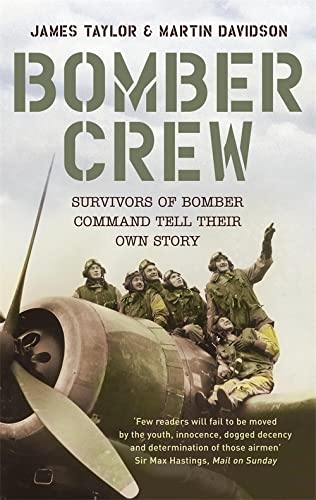 BOMBER CREW tells the vivid stories of the young men sent on perilous raids during World War II through the voices of those who survived.

Long after the Battle of Britain, the aircrews of RAF Bomber Command risked their lives night after night during the Second World War. Over 55,000 of the airmen never returned from these missions; a further 10,000 became prisoners of war. And yet Bomber Command has been mired in controversy and its veterans - all volunteers - have never been awarded a campaign medal. Their crucial contribution to the outcome of the war has all too often been overlooked.

BOMBER CREW exposes the bravery of these men using gripping first-person testimony from the surviving pilots and crew. For them this was a time of incredible hardship and adrenaline, courage and friendship, and their stories bear witness to the strength of the human spirit in times of incredible danger. Never before has their story been so vividly told. This is also a revealing look at the history of Bomber Command itself, from the early days through to eventual victory in 1945.

From the terrifying action of the bombing raids to the intimate personal accounts of heroism, tragedy and triumph, this is the ultimate account of these brave men and their contribution to the Allied victory.

This is a remarkable book . . . a vivid history of a vital era, replacing popular notions with something more plausible and even more impressive. * Daily Express on SPITFIRE ACE *
These young men went out to fly knowing that they only had a slim chance of completing a tour of operations and they went on doing it. My admiration for them is undimmed. * Max Hastings, Mail on Sunday *
James Taylor is a writer and television researcher and Martin Davidson is one of Britain's leading television producers; they were co-authors of SPITFIRE ACE.
GOR011881966
9780340838723
0340838728
Bomber Crew by James Taylor
James Taylor
Used - Like New
Paperback
Hodder & Stoughton
2005-10-10
480
N/A
Book picture is for illustrative purposes only, actual binding, cover or edition may vary.
The book has been read, but looks new. The book cover has no visible wear, and the dust jacket is included if applicable. No missing or damaged pages, no tears, possible very minimal creasing, no underlining or highlighting of text, and no writing in the margins
Trustpilot