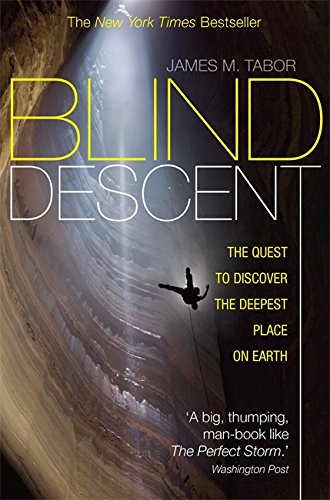 The New York Times bestselling account of a thrilling real-life journey into deepest cave on earth.

Blind Descent: The Quest to Discover the Deepest Place on Earth by James M. Tabor

The deepest cave on earth was a prize that had remained unclaimed for centuries, long after every other ultimate discovery had been made. This is the story of the men and women who risked everything to find it, earning their place in history beside the likes of Peary, Amundsen, Hillary, and Armstrong.

In 2004, two great scientist-explorers attempted to find the bottom of the world. Bold, American Bill Stone was committed to the vast Cheve Cave, located in southern Mexico and deadly even by supercave standards. On the other side of the globe, legendary Ukrainian explorer Alexander Klimchouk - Stone's opposite in temperament and style - had targeted Krubera, a freezing nightmare of a supercave in the Republic of Georgia.

Blind Descent explores both the brightest and darkest aspects of the timeless human urge to discover - to be first. It is also a thrilling epic about a pursuit that makes even extreme mountaineering and ocean exploration pale by comparison. These supercavers spent months in multiple camps almost two vertical miles deep and many more miles from their caves' exits. They had to contend with thousand-foot drops, deadly flooded tunnels, raging whitewater rivers, monstrous waterfalls, mile-long belly crawls, and much more. Perhaps even worse were the psychological horrors produced by weeks plunged into absolute, perpetual darkness, beyond all hope of rescue, including a particularly insidious derangement called 'The Rapture'.

Blind Descent is a testament to human survival and endurance - and to two extraordinary men whose relentless pursuit of greatness led them to heights of triumph and depths of tragedy neither could have imagined.

Heart-stopping and relentlessly gripping. Tabor takes us on an odyssey into unfathomable worlds beneath us, and into the hearts of rare explorers who will do anything to get there first. -- Robert Kurson, author of Shadow Divers
Hair-raising . . . the chronicle of an obsession to reach the deepest, darkest, loneliest, scariest, least survivable pocket of the planet....A big thumping man-book like The Perfect Storm. * Washington Post. *
Using a pulse-pounding narrative, this is tense real-life adventure pitting two master cavers mirroring the cold war with very uncommonly high stakes. * Publishers Weekly, starred review *
Blind Descent is as awe-inspiring as any adventure story above ground. Tabor's claustrophobic and pulse-pounding narrativepulls no punches in describing the many terrifying hazards that cavers face underground. Blind Descent is a captivating summer read for adventure seekers and armchair adrenaline junkies alike. * Amazon.com Best Books of June 2010 *
A fascinating and informative introduction to the sport of cave diving, as well as a dramatic portrayal of a significant man-vs.-nature conflict. * Kirkus Reviews *
James M. Tabor's last book was the international award-winning Forever on the Mountain. Tabor is a former contributing editor to Outside magazine and Ski Magazine; his writing has also appeared in Time, The Wall Street Journal, The Washington Post, and many other publications.
GOR003397956
9781849018562
1849018561
Blind Descent: The Quest to Discover the Deepest Place on Earth by James M. Tabor
James M. Tabor
Used - Very Good
Paperback
Little, Brown Book Group
20110621
320
N/A
Book picture is for illustrative purposes only, actual binding, cover or edition may vary.
This is a used book - there is no escaping the fact it has been read by someone else and it will show signs of wear and previous use. Overall we expect it to be in very good condition, but if you are not entirely satisfied please get in touch with us
Trustpilot