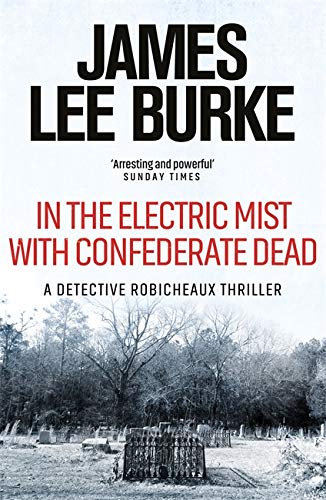 In the Electric Mist With Confederate Dead by James Lee Burke

In the Electric Mist With Confederate Dead by James Lee Burke

Hunting a sadistic killer who targets young prostitutes, Detective Dave Robicheaux has no mind to be sidetracked into persuading ex-schoolmate mobster Julie 'Baby Feet' Balboni to leave town. And it turns out that Balboni is the money behind a Civil War movie that's bringing in good business.

But then the film crew stumble on a skeleton out in the bayou, and the links between a thirty-year-old lynching, a Civil War general, Balboni and the serial killer lead Dave into treacherous waters, with only a handful of unexpected allies to help him protect his own.

Praise for one of the great American crime writers, James Lee Burke:

'James Lee Burke is the heavyweight champ, a great American novelist whose work, taken individually or as a whole, is unsurpassed.' Michael Connelly

'Richly deserves to be described now as one of the finest crime writers America has ever produced.' Daily Mail

1. Cimarron Rose
2. Heartwood
3. Bitterroot
4. In The Moon of Red Ponies

James Lee Burke is the heavyweight champ, a great American novelist whose work, taken individually or as a whole, is unsurpassed. * Michael Connelly *
A gorgeous prose stylist. * Stephen King *
Richly deserves to be described now as one of the finest crime writers America has ever produced. * Daily Mail *
The gentle giant of US crime writers, Burke always ensures that his Louisiana detective Dave Robicheaux grapples with hot topics as much as with his own inner demons. * i newspaper *
There are not many crime writers about whom one might invoke the name of Zola for comparison, but Burke is very much in that territory. His stamping ground is the Gulf coast, and one of the great strengths of his work has always been the atmospheric background of New Orleans and the bayous. His big, baggy novels are always about much more than the mechanics of the detective plot; his real subject, like the French master, is the human condition, seen in every situation of society. * Independent *
The king of Southern noir * Daily Mirror *
His lyrical prose, his deep understanding of what makes people behave as they do, and his control of plot and pace are masterly. * Sunday Telegraph *
One of the finest American writers. * Guardian *
When it comes to literate, pungently characterised American crime writing, James Lee Burke has few peers. * Daily Express *

James Lee Burke is the author of many previous novels, many featuring Detective Dave Robicheaux. He won the EDGAR AWARD in 1998 for CIMARRON ROSE, while BLACK CHERRY BLUES won the EDGAR in 1990 and SUNSET LIMITED was awarded the CWA GOLD DAGGER in 1998. He lives with his wife, Pearl, in Missoula, Montana and New Iberia, Louisiana.

GOR001231036
9780752810652
0752810650
In the Electric Mist With Confederate Dead by James Lee Burke
James Lee Burke
Dave Robicheaux
Used - Very Good
Paperback
Orion Publishing Co
1997-06-02
416
N/A
Book picture is for illustrative purposes only, actual binding, cover or edition may vary.
This is a used book - there is no escaping the fact it has been read by someone else and it will show signs of wear and previous use. Overall we expect it to be in very good condition, but if you are not entirely satisfied please get in touch with us
Trustpilot