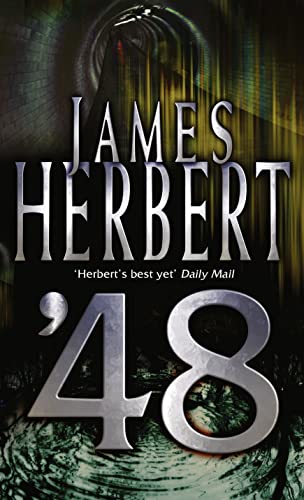 The unmissable new action-thriller from one of the biggest names in British fiction - the No 1 bestselling author of The Ghosts of Sleath, Haunted, The Magic Cottage and The Rats.

The unmissable new action-thriller from one of the biggest names in British fiction - the No 1 bestselling author of The Ghosts of Sleath, Haunted, The Magic Cottage and The Rats.

As millions of readers around the world will testify, James Herbert's ability to shock and enthral is matchless. Now, in '48, he has surpassed his own remarkable achievements to create an electrifying new novel of pure heart-stopping action and invention that will take readers to new levels of terror and excitement.

In 1945, Hitler unleashes the Blood Death on Britain as his final act of vengeance. Hoke, an American pilot and one of a tiny minority with a rare blood group unaffected by the deadly disease, has survived alone among the debris and the dead of London for three years. Now, in 1948, a slow-dying group of Fascist Blackshirts believe their only hope is a transfusion of blood from one of Hoke's kind. Ever more desperate as their deaths approach, they're after his blood.

`Break-neck pace... a story for those who like their plots exploding with excitement and fear, set against an apocalyptic backdrop. A perfect adrenalin-packed alternative to Booker Prize pretension.'
Daily Express

James Herbert is one of the most influential and widely imitated authors of our time. His previous novels are The Rats, The Fog, The Survivor, Fluke, The Spear, Lair, The Dark, The Jonah, Shrine, Moon, Domain, The Magic Cottage, Sepulchre, Haunted, Creed, Portent and
The Ghosts of Sleath.

GOR000474403
9780006476009
0006476007
'48 by James Herbert
James Herbert
Used - Very Good
Paperback
HarperCollins Publishers
1997-02-27
336
N/A
Book picture is for illustrative purposes only, actual binding, cover or edition may vary.
This is a used book - there is no escaping the fact it has been read by someone else and it will show signs of wear and previous use. Overall we expect it to be in very good condition, but if you are not entirely satisfied please get in touch with us
Trustpilot