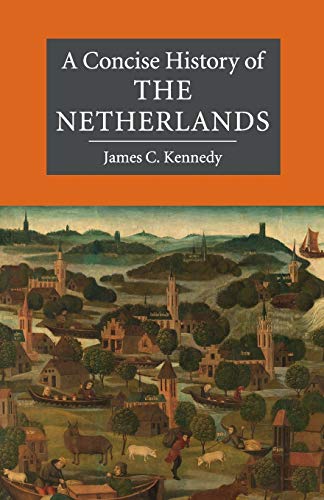 A Concise History of the Netherlands by James C. Kennedy (University College Utrecht)

The Netherlands is known among foreigners today for its cheese and its windmills, its Golden Age paintings and its experimentation in social policies such as cannabis and euthanasia. This book explores the historical background to these quintessentially Dutch achievements and offers a comprehensive yet compact history of this fascinating country.

A Concise History of the Netherlands by James C. Kennedy (University College Utrecht)

The Netherlands is known among foreigners today for its cheese and its windmills, its Golden Age paintings and its experimentation in social policies such as cannabis and euthanasia. Yet the historical background for any of these quintessentially Dutch achievements is often unfamiliar to outsiders. This Concise History offers an overview of this surprisingly little-known but fascinating country. Beginning with the first humanoid settlers, the book follows the most important contours of Dutch history, from Roman times through to the Habsburgs, the Dutch Republic and the Golden Age. The author, a modernist, pays particularly close attention to recent developments, including the signature features of contemporary Dutch society. In addition to being a political history, this overview also gives systematic attention to social and economic developments, as well as in religion, the arts and the Dutch struggle against the water. The Dutch Caribbean is also included in the narrative.
'In his sweeping and beautifully written history of the Netherlands, James C. Kennedy offers the reader a compelling story of Dutch history from the early middle ages to the twenty-first century. He highlights the diverse nature of Dutch society, the heterogeneous quality of its politics, and its ability to adapt and thrive in the rapid currents of change. It's the story of a small country with a big history, whose legacy is global in impact. This is the best single volume history in English on the Netherlands.' Peter Arnade, University of Hawaii
'With a stimulating mix of admiration and a keen eye for all its downsides, Kennedy explores and explains the remarkable historical ability of the Dutch to form a harmonious society out of different, often conflicting, parts. An illuminating guide to the past, and for the future.' Jan Hein Furnee, Radboud Universiteit Nijmegen, the Netherlands
'In seven crisply written chapters, James C. Kennedy offers us a comprehensive survey of the history of the Netherlands, one of Europe's most important small states, whose size belies its influence on European and even global economic, political and cultural history. Kennedy's narrative highlights both the successes and failures of the Dutch experience and underscores the ongoing Dutch capacity for adaptability under changing and challenging historical circumstances.' Christine Kooi, Louisiana State University
'During their Golden Age, the Dutch were 'the wonder of all their neighbours'. In many ways, they still are. James C. Kennedy charts the unlikely history of this small but successful country, uncovering its secrets in lucid prose. A very impressive achievement.' Maarten Prak, Universiteit Utrecht, the Netherlands
'James C. Kennedy has written a wonderful history of the Netherlands. This in itself is a marvelous thing, and Kennedy has done a great service to the field simply by offering us this concise and incisive book where none practically existed. But he offers much more: a beautifully presented, gracefully written and cogently argued case for the importance of Dutch history. An instant classic.' Benjamin Schmidt, University of Washington
'This best comprehensive history of the Netherlands, with thorough coverage in a few hundred pages, is a marvel both in its evenhandedness and its beautiful writing. ... Essential.' J. J. Butt, Choice
'Just like his rendition of the historiographical state of the art in the rest of the book, I find Kennedy's analysis of current political events (in which the work of several of his own students resonates) entirely recognizable and generally convincing. A Concise History of the Netherlands is therefore recommended for any reader, Dutch or non-Dutch, with an interest in the history of the Netherlands but little time to read.' Joris Oddens, European History Quarterly
James C. Kennedy is an expert in recent Dutch history. He has published widely in this field, including books on the cultural revolution of the 1960s and Dutch euthanasia policy. For eight years, he was Professor of Dutch History from the Middle Ages at the University of Amsterdam, before becoming Dean of University College Utrecht.
Introduction; 1. From the margins to the mainstream: Dutch history to 1384; 2. Rise of the Northern Netherlands, 1384-1588; 3. A young republic's golden age, 1588-1672; 4. Diminishing returns and new hopes, 1672-1795; 5. Building a nation-state, 1795-1870; 6. Progress and crisis, 1870-1949; 7. A progressive beacon to the world, 1949-2016; Epilogue.
NGR9780521699174
9780521699174
0521699177
A Concise History of the Netherlands by James C. Kennedy (University College Utrecht)
James C. Kennedy (University College Utrecht)
Cambridge Concise Histories
New
Paperback
Cambridge University Press
20170713
502
N/A
Book picture is for illustrative purposes only, actual binding, cover or edition may vary.
This is a new book - be the first to read this copy. With untouched pages and a perfect binding, your brand new copy is ready to be opened for the first time
Trustpilot