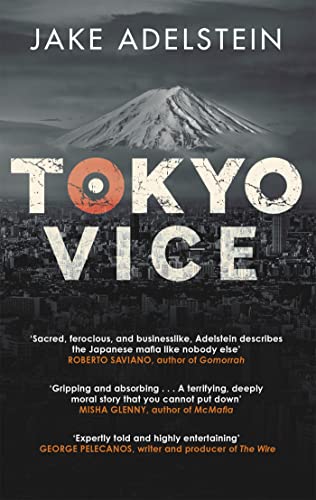 A page turning insider's account of reporting on crime in Japan. Does for Tokyo what Homicide did for Baltimore.

From the only American journalist ever to have been admitted to the insular Tokyo Metropolitan Police press club: a unique, firsthand, revelatory look at Japanese culture from the underbelly up.

At nineteen, Jake Adelstein went to Japan in search of peace and tranquility. What he got was a life of crime . . . crime reporting, that is, at the prestigious Yomiuri Shinbun. For twelve years of eighty-hour workweeks, he covered the seedy side of Japan, where extortion, murder, human trafficking, and corruption are as familiar as ramen noodles and sake. But when his final scoop brought him face to face with Japan's most infamous yakuza boss-and the threat of death for him and his family-Adelstein decided to step down . . . momentarily. Then, he fought back.

In Tokyo Vice, Adelstein tells the riveting, often humorous tale of his journey from an inexperienced cub reporter-who made rookie mistakes like getting into a martial-arts battle with a senior editor-to a daring, investigative journalist with a price on his head. With its vivid, visceral descriptions of crime in Japan and an exploration of the world of modern-day yakuza that even few Japanese ever see, Tokyo Vice is a deeply thought-provoking book: equal parts cultural expose, true crime, and hard-boiled noir.

Terrific. With gallows humour and a hard-boiled voice, Adelstein takes readers on a shadow journey throught the Japanese underworld and examines the twisted relationships of journalists, cops, gangsters. Expertly told and highly entertaining. -- George Pelecanos
Sacred, ferocious, and businesslike, Adelstein describes the Japanese mafia like nobody else. -- Roberto Saviano, author of Gomorrah.
Gripping and absorbing ... A terrifying, deeply moral story that you cannot put down. -- Misha Glenny, author of McMafia.
Hugely fascinating... utterly authentic. * Literary Review *
Fascinating * Books Quarterly *
thrilling * Financial Times *
Hardcore * Jewish Chronicle *
Gripping. * Catholic Herald *
Fascinating. * James Cracknell, Daily Express *
Jake Adelstein was a reporter for the Yomiuri Shinbun, Japan's largest newspaper, from 1993 to 2005. From 2006 to 2007 he was the chief investigator for a U.S. State Department-sponsored study of human trafficking in Japan. Considered one of the foremost experts on organized crime in Japan, he works as a writer and consultant in Japan and the United States. He is also the public relations director for the Washington, D.C.-based Polaris Project Japan, which combats human trafficking and the exploitation of women and children in the sex trade.
NGR9781849014649
9781849014649
1849014647
Tokyo Vice by Jake Adelstein
Jake Adelstein
New
Paperback
Little, Brown Book Group
2010-06-24
400
N/A
Book picture is for illustrative purposes only, actual binding, cover or edition may vary.
This is a new book - be the first to read this copy. With untouched pages and a perfect binding, your brand new copy is ready to be opened for the first time
Trustpilot