A Devil is Waiting Jack Higgins 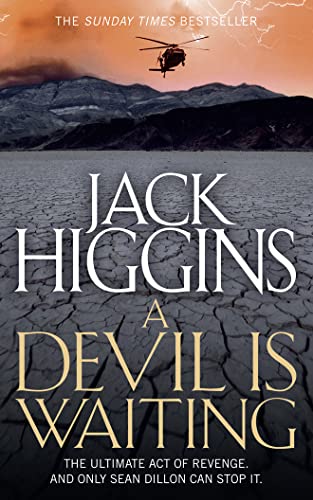 A Devil is Waiting by Jack Higgins

THE NEW HIGGINS HAS LANDED! The mesmerizing new Sean Dillon thriller of murder, terrorism and revenge from the Sunday Times bestselling author.

THE NEW HIGGINS HAS LANDED! The mesmerizing new Sean Dillon thriller of murder, terrorism and revenge from the Sunday Times bestselling author.

Fresh from his mission in THE JUDAS GATE to seek out and eliminate one of al Qaeda's most valued agents, a traitor responsible for countless soldiers' deaths in Afghanistan, Sean Dillon is back in a blistering new adventure.

The American President, on a planned visit to Europe, is entertained by the British Prime Minister on the terrace of the House of Commons. On the same day, London born Mullah Ali Salim makes an impassioned speech at Hyde Park Corner accusing the President of war crimes, objecting to his presence and offering a blessing to anyone who will assassinate him.

Dillon, Major Ferguson and Daniel Holley are called into action, helped by a new recruit, Intelligence Corp Captain Sara Gideon, a war hero in the Afghan conflict, whose speciality is Pashta and Iranian. They quickly find themselves trying to handle a massive upsurge in terrorism from enemies near and far, all with links to al Qaeda.

As a Sephardic Jew from a wealthy and ancient English family, Sara will find herself at the heart of the firestorm when she is swept into the heart of the terror organisation. Though their leader may be gone the threat remains as terrible as ever, and though Dillon and company may have won the first battle with al Qaeda, they will learn the war is far from over. A devil is indeed waiting and the assassination plan is only the beginning...

'Open a Jack Higgins novel and you'll encounter a master craftsman at the peak of his powers ... first-rate tales of intrigue, suspense and full-on action.' Sunday Express

'With fresh plots, interesting characters and vibrant settings, Jack Higgins has firmly cemented his reputation as one of the world's most successful thriller writers.' The Strand Magazine

'Higgins is a master of his craft.' Daily Telegraph

'A thriller writer in a class of his own.' Financial Times

Jack Higgins was a soldier and then a teacher before becoming a full-time writer. 'The Eagle Has Landed' turned him into an international bestselling author and his novels have since sold over 250 million copies and been translated into sixty languages. Many of them have also been made into successful films

GOR004282799
9780007452231
0007452233
A Devil is Waiting (Sean Dillon Series, Book 19) by Jack Higgins
Jack Higgins
Sean Dillon Series
Used - Very Good
Paperback
HarperCollins Publishers
20121025
352
N/A
Book picture is for illustrative purposes only, actual binding, cover or edition may vary.
This is a used book - there is no escaping the fact it has been read by someone else and it will show signs of wear and previous use. Overall we expect it to be in very good condition, but if you are not entirely satisfied please get in touch with us
Trustpilot