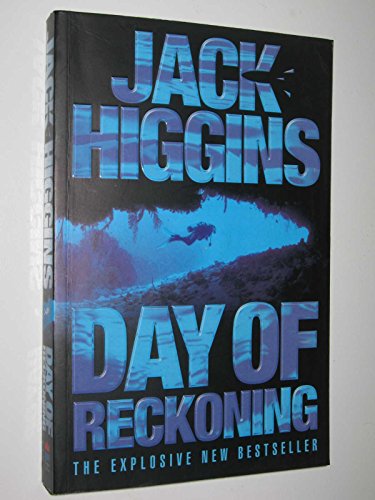 Day of Reckoning by Jack Higgins

The incomparable Jack Higgins returns to HarperCollins with a terrific new thriller, featuring his enigmatic hero Sean Dillon and a battle to defeat a Mafia don.

The incomparable Jack Higgins returns to HarperCollins with a terrific new thriller, featuring his enigmatic hero Sean Dillon and a battle to defeat a Mafia don.

'HIGGINS IS THE MASTER' TOM CLANCY

It's all action and suspense as Sean Dillon and his secret intelligence colleagues seek to help American White House security insider Blake Johnson avenge the death of his ex-wife, a reporter murdered for getting too close to a Mafia story. In London, Beirut and Ireland, the daredevil friends are prepared to risk everything as they combine to thwart the ever more desperate ambition of Mafia frontman Jack Fox.

Here in his eighth adventure, former IRA terrorist turned British Government enforcer Sean Dillon is established as one of the great characters in modern fiction, while Jack Higgins has an unrivalled position as the biggest name in thriller writing around the world.

Fast-paced and relentlessly gripping, Day of Reckoning is one of his finest works, destined to become yet another in a long line of international bestsellers.

'Higgins is a master of his craft.'
Daily Telegraph

'A thriller writer in a class of his own.'
Financial Times

'It's Dillon's likeability and the author's adroitness in giving his character the room he needs that make Higgins's novels so readable.'
Washington Times

Jack Higgins was a soldier and then a teacher before becoming a full-time writer. The Eagle Has Landed turned him into an international bestselling author and his novels have since sold over 250 million copies and been translated into fifty-five languages. Many of them have also been made into successful films.

GOR007468460
9780002261500
0002261502
Day of Reckoning (Sean Dillon Series, Book 8) by Jack Higgins
Jack Higgins
Sean Dillon Series
Used - Very Good
Paperback
HarperCollins Publishers
2000-02-07
304
N/A
Book picture is for illustrative purposes only, actual binding, cover or edition may vary.
This is a used book - there is no escaping the fact it has been read by someone else and it will show signs of wear and previous use. Overall we expect it to be in very good condition, but if you are not entirely satisfied please get in touch with us
Trustpilot