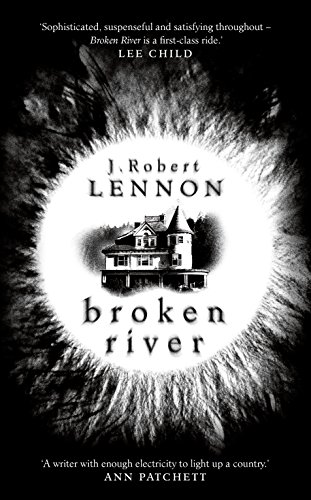 A stunning psychological literary thriller from 'A master of the dark arts' (Kelly Link) Following a string of affairs, Karl and Eleanor are giving their marriage one last shot: they're moving with their twelve-year-old daughter Irina from Brooklyn to a newly renovated, apparently charming old house near the upstate New York town of Broken River. Before their arrival, the house stood empty for over a decade. The reason is no secret. Twelve years previously, a brutal double murder took place there, a young couple killed in front of their child. The crime was never solved, and most locals consider the house cursed. The family may have left the deceptions of their city life behind them, but all three are still lying to each other, and to themselves. Before long the family's duplicity will unleash forces none of them could possibly have anticipated, putting them in mortal danger. This new novel by America's master of literary rule-breaking is part thriller, part family drama, part Gothic horror - and like all J.Robert Lennon's novels, it shows the consequences of human deceitfulness, and the dreadful force the past can exert on the present.
Compelling from the first page, and then smart, sophisticated, suspenseful and satisfying throughout -- Broken River is a first-class ride. -- Lee Child
J. Robert Lennon is a connoisseur of calamity, qualms and paradox, all of which are on profuse display in his crafty, seductive eighth novel, Broken River... Broken River is a remarkable performance, a magic trick that makes you laugh at its audacity. Lennon has written a realistic novel with vivid characters and flashes of humour and an evocative mood... when you close a novel as good as Broken River, something, not quite a ghost, may follow you. -- Terrence Rafferty * New York Times *
A cracker of a novel - sharp, dark and suspenseful -- Hephzibah Anderson * Mail on Sunday *
What prevents Broken River from being classified as simply a horror or crime story are Lennon's linguistic energy and dark humour ... it's a rare book that manages to bend genres so successfully - that thrills and frightens while evoking such insight into human failings and the lure of the past -- Zoe Apostolides * Financial Times *
Fizzing with line-by-line propulsion and wickedly plotted with slow-burn complexity, this is a knockout, unmissable performance from a writer at the very top of his game. * Observer *
Broken River is like a Coen brothers movie set in rural New England... Lennon has a lot of fun... and we do, too. * Sunday Times *
A writer with enough electricity to light up the country. -- Ann Patchett
Hypnotic and unsettling, Broken River weaves a dark, compelling spell -- Mick Herron, author of Real Tigers
Lennon's prose has a languorous, lingering quality with shifts of perspective and tonal jolts that make you concentrate all the harder. I might venture that Broken River ought to be on prize longlists, but as with the house, nothing is certain... There is a ghastly creepiness to all this, magnified by the cat-like elegance of the prose... Two thirds of the way through this novel, I fantasised about an epic Mexican shootout where Wes Anderson, Guy Maddin, Sofia Coppola, David Lynch and Kevin Smith argued about who should get the film rights. At the same time, I realised it is impossible to film. So much happens inside the characters: so much is presented as hypothetical. This is an astonishing, nasty, brilliant, upsetting work. * Guardian *
J Robert Lennon's tautly constructed blend of literary fiction and thriller is a compelling cocktail, right down to its explosive and shocking ending -- John Harding * Daily Mail *
A tense, surprising thriller, with perverse overtones of the Coen brothers variety -- Jonathan Lethem * New York Times *
Broken River is a novel with multiple identities: it's a ghost story, a crime story, a coming-of-age story, a story about love and family and fiction itself. What is astonishing is how well all these elements work together, how they intertwine as seamlessly as the fates of Lennon's characters. As good as fiction gets. -- Ben Winters
An intimate portrait of the violence we do to each other, about family and art and the scars of unspeakable acts. Broken River blisters and rips and ultimately soars. I loved it. -- Lauren Beukes, author of The Shining Girls and Broken Monsters
J. Robert Lennon is the author of eight novels, including Familiar, Castle and Mailman, and two story collections, Pieces for the Left Hand and See You in Paradise. His fiction has appeared in the Paris Review, Granta, Harper's, Playboy, and the New Yorker. He lives in Ithaca, New York, where he teaches writing at Cornell University.
GOR008435323
9781781257975
1781257973
Broken River: The most suspense-filled, inventive thriller you'll read this year by J Robert Lennon
J Robert Lennon
Used - Very Good
Hardback
Profile Books Ltd
2017-06-01
288
N/A
Book picture is for illustrative purposes only, actual binding, cover or edition may vary.
This is a used book - there is no escaping the fact it has been read by someone else and it will show signs of wear and previous use. Overall we expect it to be in very good condition, but if you are not entirely satisfied please get in touch with us
Trustpilot