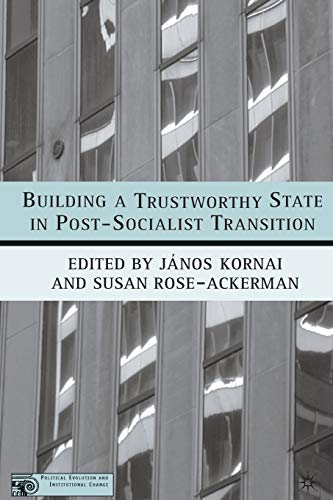 Building a Trustworthy State in Post-Socialist Transition by J. Kornai

Building a Trustworthy State in Post-Socialist Transition considers the problems and prospects for creating trustworthy and reliable public institutions in the aftermath of the transition from socialism in Central and Eastern Europe.

Building a Trustworthy State in Post-Socialist Transition by J. Kornai

Building a Trustworthy State in Post-Socialist Transition considers the problems and prospects for creating trustworthy and reliable public institutions in the aftermath of the transition from socialism in Central and Eastern Europe. The volume draws on the experience of those who have lived through and studied the transition and contrasts their insights with those of generalist scholars who study government accountability and democracy. The contributions originated in the Collegium Budapest project on Honesty and Trust: Theory and Experience in the Light of the Post-Socialist Transition, organized by Janos Kornai and Susan Rose-Ackerman. A second volume entitled, Creating Social Trust in Post-Socialist Transition , is being published simultaneously.

"Building a Trustworthy State in Post-Socialist Transition is an outstanding contribution to the study of the problems democratic consolidation in the former Communist world. The editors, Professors Susan Rose-Ackerman and Janos Kornai, both distinguished scholars of the economic transition, brought together a brilliant international cast of authors to examine the moral, legal and political problems of building 'trust' or 'social capital' without which in their view formally democratic institutions lack reliability and accountability, and therefore legitimacy in the deeper sense of that term. The double comparative perspective that runs through the volume is especially helpful to students of the 'more successful' Central European cases that are rightly contrasted both with consolidated Western and more authoritarian Eastern democracies." - Andrew Arato, author of Civil Society, Constitution and Legitimacy

"Kornai and Rose-Ackerman have put together a tightly focused, theoretically ambitious, empirically grounded set of essays on the problem of trust in post-socialist societies, the central issue in the second stage of transition. This outstanding team of scholars thinks deeply about the problem of developing institutions that are transparent, capable of responding to democratic pressures, and not held captive by those who managed to seize power in the first round of changes. The interdisciplinary and international set of authors brings an unusually rich diversity of theories and methods to the table, full of nuance and detail. This is a major contribution to our understanding of the issues, and the experiences detailed and the lessons learned in post-socialist Europe may well be brought to bear on an understanding and perhaps even a reform of societies farther West." - Kim Lane Scheppele, John J. O'Brien Professor of Law and Sociology, University of Pennsylvania

"Among its many contributions, this volume helps to create analytic clarity on the definition of corruption. Offe's original essay on this topic is impressive and should become a standard text on this issue...For those who believe there is reason to be concerned about corruption in transition economies, this volume addresses theissue from a number of standpoints, provides rich theoretical and some solid empirical work on the topic, and discusses important moral and governance issues." - Mitchell Orenstein, Slavic Review