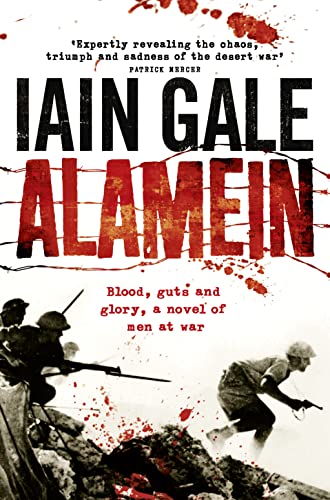 Superb war novelist, Iain Gale, moves into the twentieth century and World War Two, telling the story of the eleven days that would change the course of history.

Superb war novelist, Iain Gale, moves into the twentieth century and World War Two, telling the story of the eleven days that would change the course of history.

There are some battles that change the course of history: Alamein is one of those.

In October 1942, Britain and its allies were in trouble. Germany and its Axis partners were winning ground in Europe, in Russia, in the Atlantic and they were poised to take the Suez Canal. But it was in this North Africa battle that the stand was made, that the tide of World War Two began to turn.

It was a battle of strong characters: Rommel and Montgomery lead their men through an extraordinary eleven day battle, in unforgiving terrain, amid the swirling sandstorms and the desert winds.

Iain Gale, author of the outstanding historical novel Four Days in June, tells this dramatic story through seven dynamic characters, many of whom are based on real people. Drawn from both sides of the conflict, they include a major from a Scottish brigade, a young lieutenant in the thick of the tank battle, an Australian sergeant and a charismatic Italian commander of a parachute battalion. Through their eyes we see the battle unfold; the strategy, the individual actions and skirmishes, the fear, the determination and the extraordinary courage on both sides.

`A powerful novel of men at war. A triumph' Bernard Cornwell

`His brutal, bloody detail catches the chaos of battle. His prose is a sand-blown lens from the front-line. Today's readers will feel both shock and shame at the sacrifices made on both sides by the heroes of Alamein' Quentin Letts, Daily Mail

`My father was at Alamein and Gale captures many of the stories he told me. This is Gale's best book. He reveals the chaos, triumph and sadness of the desert war expertly showing every protagonists' point of view.' Patrick Mercer, OBE, MP

`A treat for every history buff, and a vivid picture of men at war' Scotland on Sunday

`An old-fahioned tale of military strategy and valour' Glasgow Herald

Iain Gale has strong Scottish and military roots. He is editor of the magazine of the National Trust for Scotland and lives in Edinburgh with his family.

GOR002071308
9780007278688
0007278683
Alamein: The turning point of World War Two by Iain Gale
Iain Gale
Used - Very Good
Paperback
HarperCollins Publishers
2010-09-02
400
N/A
Book picture is for illustrative purposes only, actual binding, cover or edition may vary.
This is a used book - there is no escaping the fact it has been read by someone else and it will show signs of wear and previous use. Overall we expect it to be in very good condition, but if you are not entirely satisfied please get in touch with us
Trustpilot