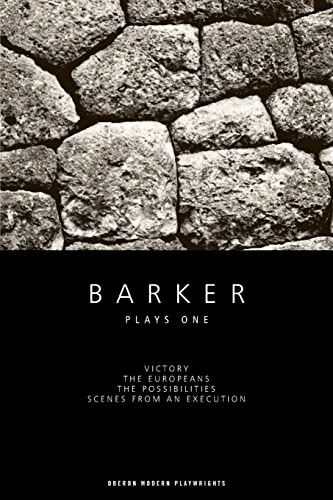 Barker: Plays One by Howard Barker

A collection of four of Howard Barker's acclaimed plays: Victory, The Europeans, The Possibilities and Scenes From An Execution.

Barker: Plays One by Howard Barker

Includes the plays Victory, The Europeans, The Possibilities and Scenes From An Execution.


Howard Barker is one of the most significant and controversial dramatists of his time. His plays challenge, unsettle and expose. These plays are among his best-known works, and their energy, poetic language and imagination have fixed them firmly in the international repertoire.


Exploring the tragic form defined by Barker as Theatre of Catastrophe, three of the plays speculate on human behaviour in moments of historical crisis. Victory is set in the English Civil War and follows the ethical voyage of a widow towards personal reconstruction. The Europeans takes one of the great eruptions of Islamic imperialism asthe background for a young woman's insistence on her right to her own identity. Scenes from an Execution shows the struggle of an independently-minded artist against the power of the Venetian state.

'Shows Barker's poetic talent at its most disciplined.' - The Guardian

Howard Barker is an internationally renowned dramatist, whose first plays were performed at the Royal Court and by the Royal Shakespeare Company. Since 1992 his work has been presented by his own company The Wrestling School. Barker's theatre is characterized by its poetic, non-naturalistic form and inhabits worlds of contradiction, suffering and sexual passion. Barker is also a poet and theorist of theatre, whose 'Theatre of Catastrophe' defines a new form of tragedy for our times.

GOR003632596
9781840026122
184002612X
Barker: Plays One by Howard Barker
Howard Barker
Oberon Modern Playwrights
Used - Very Good
Paperback
Bloomsbury Publishing PLC
2006-04-07
288
N/A
Book picture is for illustrative purposes only, actual binding, cover or edition may vary.
This is a used book - there is no escaping the fact it has been read by someone else and it will show signs of wear and previous use. Overall we expect it to be in very good condition, but if you are not entirely satisfied please get in touch with us
Trustpilot