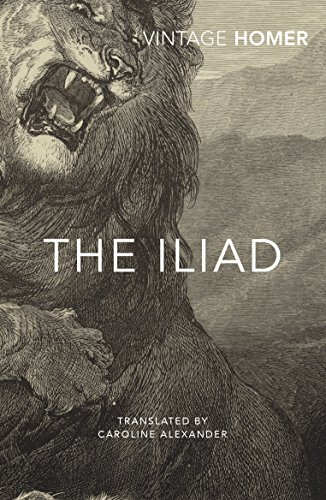 The Iliad by Homer

High on Olympus, Zeus and the assembled deities look down on the world of men, to the city of Troy where a bitter and bloody war has dragged into its tenth year, and a quarrel rages between a legendary warrior and his commander. Greek ships decay, men languish, exhausted, and behind the walls of Troy a desperate people await the next turn of fate.

The Iliad by Homer

Read this stunning translation of Homer's great war epic, the legendary tale of honour, love, loss and revenge during the fall of the city of Troy.


High on Olympus, Zeus and the assembled deities look down on the world of men, to the city of Troy where a bitter and bloody war has dragged into its tenth year, and a quarrel rages between a legendary warrior and his commander. Greek ships decay, men languish, exhausted, and behind the walls of Troy a desperate people await the next turn of fate.


This is the Iliad: an ancient story of enduring power; magnetic characters defined by stirring and momentous speeches; a panorama of human lives locked in a heroic struggle beneath a mischievous or indifferent heaven. Above all, this is a tale of the devastation, waste and pity of war.


Caroline Alexander's virtuoso translation captures the rhythms and energy of Homer's original Greek while making the text as accessible as possible to a modern reader, accompanied by extensive extra material to provide a background to the poem.


The result of 3,000 years of story-telling, Homer's epic tale of the fall of Troy has resonated with every age and every human conflict: this is the Iliad at its most electrifying and vital.

Virtuoso * New York Review of Books *
Caroline Alexander's Iliad is miraculous. It has the rhythms and even the lineation of the original Homeric text. Its language conveys the precise meaning of the Greek in a sinewy yet propulsive style that drives the reader inexorably forward. In my judgement, this new translation is far superior to the familiar and admired work of Lattimore, Fitzgerald and Fagles -- G.W. Bowersock, Institute for Advanced Study, Princeton
Of the many new translations of Homer's poem that have come out in the past two or three years, perhaps the most highly readable is Caroline Alexander's. Thought to be the first woman to have Englished the poem, Alexander embraces Matthew Arnold's four essential Homeric qualities: rapidity, plainness of style, simplicity of ideas and nobility of manner, in lines that ebb and flow with the tide of battle. The book wears its learning lightly, the introduction pitching the Iliad as the ultimate anti-war poem. * Times Literary Supplement *

The Homeric Iliad originates from a rich tradition of performing song. It was meant to be heard. True to the living word of the original Greek, Caroline Alexander's new translation invites us to engage directly with this tradition. When I read her verses I can almost hear the music of Homeric performance.

-- Professor Gregory Nagy, Professor of Classical Greek Literarture, Harvard University
Caroline Alexander has done admirably in rendering the meaning of the Homeric text faithfully and suitably dignified language. The format gives a genuine sense of reading a verse epic. Her line-numbers match the Greek, which will make this version convenient for use by college teachers and students -- Martin West, Emeritus Fellow of All Souls College, Oxford
Caroline Alexander is the author of seven books of non-fiction including the international bestsellers The Endurance: Shackleton's Legendary Antarctic Expedition and The Bounty: The True Story of the Mutiny on the Bounty. A contributing writer for National Geographic, Alexander has also written for the New Yorker, Smithsonian and Granta among other publications. Alexander's latest books are Lost Gold of the Dark Ages: War, Treasure and the Mystery of the Saxons and The War That Killed Achilles: The True Story of the Iliad and the Trojan War. Between 1982 and 1985, Alexander established a department of Classics at the University of Malawi, in central-east Africa.
NGR9781784870577
9781784870577
1784870579
The Iliad by Homer
Homer
New
Paperback
Vintage Publishing
20170803
608
null null null null null null null null null null
Book picture is for illustrative purposes only, actual binding, cover or edition may vary.
This is a new book - be the first to read this copy. With untouched pages and a perfect binding, your brand new copy is ready to be opened for the first time
Trustpilot