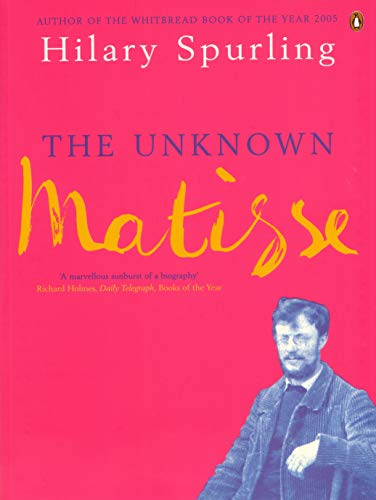 The Unknown Matisse by Hilary Spurling

Presents the biography of Matisse.

Astonishing and essential, the biography that reclaimed Henri Matisse from history's slanders and restored his place in the canon of the 20th century's greatest artists Before acclaimed biographer Hilary Spurling turned her attention to Henri Mattise, precious few facts were known about his life - and those few were distorted by inaccuracy, misunderstanding and glaring gaps. The Unknown Matisse investigates the secret life of The Wild Beast (as he was known), whose early paintings shocked and enraged his contemporaries. It tells the story of an innovative genius, born in war-torn, poverty-stricken Flanders who finally overcame hardship and disaster to fulfil Van Gogh's prophecy: 'The painter of the future will be such a colourist as has never yet been.'
"This book is extraordinary in revealing not only so much about Matisse that was previously unknown and unexpected, but also so much of real importance to an understanding of him and his art . . . Truly indispensable for anyone interested in Matisse, or in the milieu in which he lived and worked, or in the forces that shaped the art of this century--with a human dimension that is vividly drawn, utrterly compelling, and profoundly moving."
--John Elderfield, curator of the 1992 Matisse retrospective at The Museum of Modern Art, New York
"Hilary Spurling, most accomplished of biographers, sheds an entirely new light on the humiliations and failures that Henri Matisse had to overcome in order to develop into the greatest French painter of this century. Her account of Matisse's early years is as riveting as a novel by Zola."
--John Richardson, author of A Life of Picasso
"Besides being a first-rate scholar, Hilary Spurling is an artist in narrative who has unearthed a fascinating story and told it brilliantly. This is a terrific achievement."
--Michael Holroyd, author Bernard Shaw

"From the Hardcover edition."

Hilary Spurling is the author of numerous biographies, including Ivy When Young: The Early Life of Ivy Compton-Burnett 1884-1919; Paul Scott: A Life; a two-volume biography of Matisse, The Unknown Matisse and Matisse the Master (also published in the abridged single-volume Matisse: The Life); and Burying the Bones. She won the Rose Mary Crawshay Prize and the Duff Cooper Prize for Ivy When Young, the Whitbread Book of the Year Award for Matisse the Master, and the James Tait Black Memorial Prize for Burying the Bones. She grew up in Bristol and studied at the University of Oxford. From 1964 to 1970 she was Theatre Critic and Literary Editor of the Spectator, and since then she has been a regular book reviewer for the Observer and the Daily Telegraph. In 2016 she won the Biographers' Club Lifetime Achievement Award.
GOR002018984
9780140176049
0140176047
The Unknown Matisse: Man of the North: 1869-1908 by Hilary Spurling
Hilary Spurling
Used - Very Good
Paperback
Penguin Books Ltd
2000-04-27
512
Short-listed for WH Smith Literary Prize 1999 Short-listed for Whitbread Book Awards: Biography Category 1999 Short-listed for WH Smith Annual Literary Award 1999 Short-listed for Whitbread Prize (Biography) 1999
Book picture is for illustrative purposes only, actual binding, cover or edition may vary.
This is a used book - there is no escaping the fact it has been read by someone else and it will show signs of wear and previous use. Overall we expect it to be in very good condition, but if you are not entirely satisfied please get in touch with us
Trustpilot