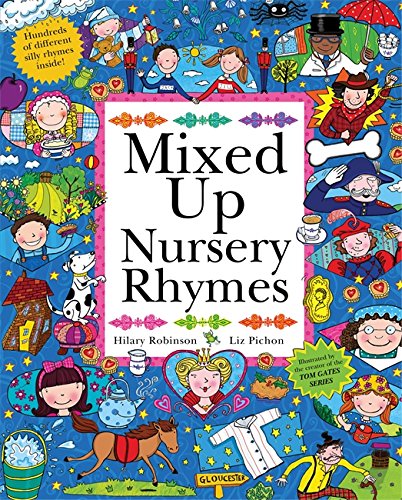 A follow-up to the best-selling Mixed up Fairy Tales which sold over 100,000 copies. This ingenious split-page book lets you create your own hilarious versions of the most-loved nursery rhymes.

First came the phenomenal bestselling Mixed up Fairy Tales with sales over 100,000 copies to date, and now comes Mixed up Nursery Rhymes! This ingenious split-page, spiral bound book lets you create your own hilarious versions of the most-loved rhymes.

The total number of mix ups is 1728 combinations!

With very large text and bright colourful illustrations it will remind children of the traditional rhymes, stir imaginations, and spark smiles. Hilarious! * Carousel *

For Email Jesus @ Bethlehem
'Lively without being irreverent.' - The Bookseller
'A thoughtful and heartfelt survey.' - TES
'Just what the modern child should have' - Marianne Adey, Co-Ordinator Children's Book Award

Classic fairy tales have been re-told often but none so entertaining and unusual as Mixed Up Fairy Tales...Whilst familiarising young children with classic fairy stories...it also introduces the endless imaginative possibilities of writing.

Children (and adults) will be enraptured from the first page. Sharratt's bright and bold illustrations bring alive the characters in this book making it accessible and involving.

* Gayle Morison *
Ingenious, imaginative fun. * Bookseller *
Our most-loved nursery rhymes can be mixed up with hilarious consequences, thanks to this sequel to the best-selling Mixed Up Fairy Tales. * Coventry Telegraph *
Variations enough for plenty of delightfully silly combinations. * The Guardian *
Endless fun... hilarious. * Parents in Touch *
Another clever delight... a fun book that would make a great present... ample material to stimulate children's imaginations. * Mixed Up Nursery Rhymes *
Hilary Robinson is the author of over 40 children's books including the top selling Mixed Up Fairy Tales and The Copper Tree. She is also a broadcaster and freelance BBC radio producer. Hilary was born in Devon and brought up in Nigeria and England. Her books have been translated into a number of languages and are sold across the world. Liz Pichon studied graphic design at Middlesex Polytechnic and Camberwell School of Art in London. She won the Smarties Book Prize Silver Award.
GOR005083783
9781444904642
1444904647
Mixed Up Nursery Rhymes: Split-Page Book by Hilary Robinson
Hilary Robinson
Mixed Up
Used - Very Good
Paperback
Hachette Children's Group
2013-07-04
32
N/A
Book picture is for illustrative purposes only, actual binding, cover or edition may vary.
This is a used book - there is no escaping the fact it has been read by someone else and it will show signs of wear and previous use. Overall we expect it to be in very good condition, but if you are not entirely satisfied please get in touch with us
Trustpilot