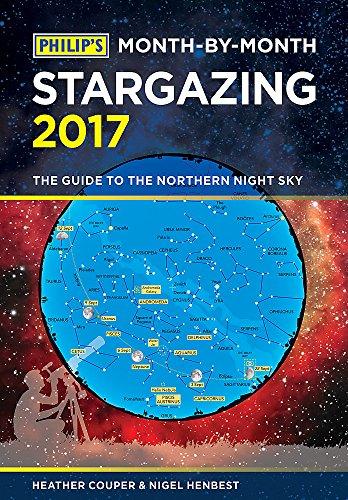 A month-by-month guide to the northern-hemisphere night sky for 2017, written by the internationally known astronomy writers and broadcasters Heather Couper and Nigel Henbest.

Philip's Month-By-Month Stargazing 2017: The guide to the northern night sky by Heather Couper

Philip's Month-by-Month Stargazing 2017 is a concise guide to the northern-hemisphere night sky, helping starwatchers to see the year's most fascinating events, whether observing with the naked eye, binoculars or a telescope. The authors have also included ideas for joining Citizen Science projects at the cutting edge of astronomical research.

The guide is suitable for use between latitudes 40 DegreesN and 60 DegreesN, including Britain and Ireland, Europe as far south as Rome, and Canada and the northern USA as far south as Philadelphia.

Each chapter (one for each month of the year) has a colour star map, created by Wil Tirion, showing the positions and phases of the Moon, the positions of the planets, and other useful information. Each month also includes a constellation described in detail; special events during the month, such as eclipses; a featured astronomical object, usually a deep-sky target; plus an astrophotograph, with details of how it was taken.

The Solar System Almanac explains the movement of the planets, with particular attention paid to their positions in 2017. Solar and lunar eclipses, meteor showers and comets are also described.

Exploring the Deep Sky provides a list of recommended deep-sky objects. The observer can use the monthly charts to discover which constellations are on view, and then use this information to plan deep-sky observing.

The book concludes with an Equipment Review. Here Robin Scagell, author of Philip's Stargazing with a Telescope, provides a round-up of what's new in observing technology.

Heather Couper is a past President of both the British Astronomical Association and the Society for Popular Astronomy. She is a Fellow of both the Royal Astronomical Society and the Institute of Physics, and a former Millennium Commissioner, for which she was awarded the CBE in 2007.

Nigel Henbest has been Astronomy Consultant to New Scientist magazine, Editor of the Journal of the British Astronomical Association, and Media Consultant to the Royal Greenwich Observatory.

GOR008053624
9781849074254
1849074259
Philip's Month-By-Month Stargazing 2017: The guide to the northern night sky by Heather Couper
Heather Couper
Used - Very Good
Paperback
Octopus Publishing Group
2016-09-08
64
N/A
Book picture is for illustrative purposes only, actual binding, cover or edition may vary.
This is a used book - there is no escaping the fact it has been read by someone else and it will show signs of wear and previous use. Overall we expect it to be in very good condition, but if you are not entirely satisfied please get in touch with us
Trustpilot