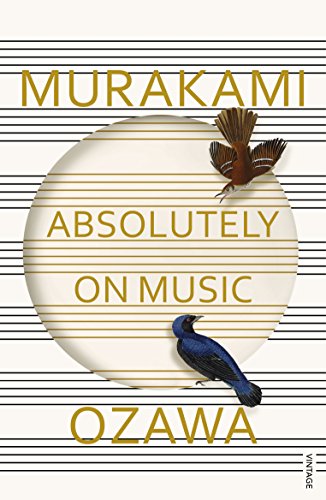 Absolutely on Music by Haruki Murakami

An unprecedented glimpse into the minds of two maestros.

Haruki Murakami's passion for music runs deep. Before turning his hand to writing, he ran a jazz club in Tokyo, and the aesthetic and emotional power of music permeates every one of his much-loved books.

Absolutely on Music: Conversations with Seiji Ozawa by Haruki Murakami

An unprecedented glimpse into the minds of two maestros.

Haruki Murakami's passion for music runs deep. Before turning his hand to writing, he ran a jazz club in Tokyo, and the aesthetic and emotional power of music permeates every one of his much-loved books. Now, in Absolutely on Music, Murakami fulfills a personal dream, sitting down with his friend, acclaimed conductor Seiji Ozawa, to talk about their shared interest.

They discuss everything from Brahms to Beethoven, from Leonard Bernstein to Glenn Gould, from record collecting to pop-up orchestras, and much more.

Absolutely on Music is an unprecedented treasure... Talking about music is like dancing about architecture, it's often said, but what joy to watch these two friends dance. * Guardian *
Hardly a soul writes of the listening and playing of music with such insight and tenderness -- Patti Smith * New York Times Book Review *
Their words tessellate perfectly, forcing the neurons in your brain into a brave new quest for artistic divinity... A book for people transfixed by the minutia of creativity. * Shortlist *
High Fidelity for classical music fans. * Publishers Weekly *
These dialogues...add up to a sprawling feast of Mahler-style "polytonality" - or, alternatively, the sort of protean jam-session that Monk and Parker relished. -- Boyd Tonkin * Arts Desk *

Haruki Murakami (Author)
In 1978, Haruki Murakami was twenty-nine and running a jazz bar in downtown Tokyo. One April day, the impulse to write a novel came to him suddenly while watching a baseball game. That first novel, Hear the Wind Sing, won a new writers' award and was published the following year. More followed, including A Wild Sheep Chase and Hard-Boiled Wonderland and the End of the World, but it was Norwegian Wood, published in 1987, which turned Murakami from a writer into a phenomenon. His books became bestsellers, were translated into many languages, including English, and the door was thrown wide open to Murakami's unique and addictive fictional universe.

Murakami writes with admirable discipline, producing ten pages a day, after which he runs ten kilometres (he began long-distance running in 1982 and has participated in numerous marathons and races), works on translations, and then reads, listens to records and cooks. His passions colour his non-fiction output, from What I Talk About When I Talk About Running to Absolutely On Music, and they also seep into his novels and short stories, providing quotidian moments in his otherwise freewheeling flights of imaginative inquiry. In works such as The Wind-Up Bird Chronicle, 1Q84 and Men Without Women, his distinctive blend of the mysterious and the everyday, of melancholy and humour, continues to enchant readers, ensuring Murakami's place as one of the world's most acclaimed and well-loved writers.

Seiji Ozawa (Author)
Seiji Ozawa served as music director of the Boston Symphony Orchestra for twenty-nine years, and was music director of the Toronto Symphony Orchestra, the San Francisco Symphony, the Chicago Symphony Orchestra's Ravinia Festival, and Wiener Staatsoper. With Kazuyoshi Akiyama, he formed the Saito Kinen Orchestra and is the director of the Seiji Ozawa Matsumoto Festival. Ozawa has been deeply involved in musical education through his work with Tanglewood Music Center Orchestra, the Ozawa International Chamber Music Academy Okushiga, Seiji Ozawa International Academy Switzerland and as founder of the Seiji Ozawa Music Academy Opera Project, organizations which provide opportunities to outstanding students in Asia and Europe. Among his many honours, Ozawa has been awarded the Officier de la Legion d'Honneur in France, the Japanese Order of Culture, the Kennedy Center Honors, and a Grammy Award for Best Opera Recording.

Jay Rubin (Translator)
Jay Rubin is the author of Injurious to Public Morals: Writers and the Meiji State and Making Sense of Japanese, and he edited Modern Japanese Writers for the Scribner Writers Series. He has translated into English two novels by the Japanese writer Soseki Natsume, and also Haruki Murakami's Norwegian Wood, The Wind-up Bird Chronicle and after the quake.

GOR008738222
9781784700140
1784700142
Absolutely on Music: Conversations with Seiji Ozawa by Haruki Murakami
Haruki Murakami
Used - Like New
Paperback
Vintage Publishing
2017-11-16
352
N/A
Book picture is for illustrative purposes only, actual binding, cover or edition may vary.
The book has been read, but looks new. The book cover has no visible wear, and the dust jacket is included if applicable. No missing or damaged pages, no tears, possible very minimal creasing, no underlining or highlighting of text, and no writing in the margins
Trustpilot