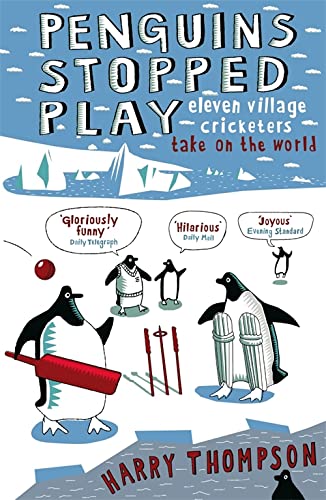 It seemed a simple enough idea at the outset: to assemble a team of eleven men to play cricket on each of the seven continents of the globe.

Except - hold on a minute - that's not a simple idea at all. And when you throw in incompetent airline officials, amorous Argentine Colonels' wives, cunning Bajan drug dealers, gay Australian waiters, overzealous American anti-terrorist police, idiot Welshmen dressed as Santa Claus, Archbishop Desmond Tutu and whole armies of pitch-invading Antarctic penguins, you quickly arrive at a whole lot more than you bargained for.

Harry Thompson's hilarious book tells the story of one of those great idiotic enterprises that only an Englishman could have dreamed up, and only a bunch of Englishmen could possibly have wished to carry out.

Praise for Harry Thompson and Penguins Stopped Play: * . *
'Actually completely brilliant' * Ian Hislop *
'A real gold standard sense of humour' * David Baddiel *
'Rare, clever, creative ... a maverick, pushing boundaries with outrageous jokes' * Guardian *
'Crammed with sharp observation, comic and cruel characterisation and a great many very good jokes... Gloriously funny and life-affirming' * Daily Telegraph *
'Surely the funniest book ever written about the English addiction to cricket...a beautiful tale of classic British humour, self-deprecation, great courage' * Daily Mail *
'Even people who despise cricket will adore this' * Times *
'Isn't only a marvellous read but in many ways captures the very essence of the game' * Observer *
'Very funny . . .he fills his warm-hearted book with a satisfying selection of tales' * Sunday Times *
'Funny and inspiring...Thompson writes with a novelist's sympathy about a wonderfully mixed bunch of characters' - Hugh Massingberd * Literary Review *
'As funny as you would expect from the writer of Have I Got News For You' * Daily Express *
'Harry Thompson wrote with such verve and wit that he could have made a trip round a multi-storey car park into an adventure' * Celia Brayfield, The Times *
'A very funny, peculiarly British travel book' * Markus Berkman, Daily Mail *
'A rip-roaring and at times touching account of a global tour by a bunch of village cricketers' * Oxford Mail *
Harry Thompson is the inventor and editor of many TV comedy series including Have I Got News For You and Never Mind the Buzzcocks. He is the author of acclaimed bestsellers, including Peter Cook: A Biography. His most recent book is a historical novel, This Thing of Darkness. He worked as a producer at Talkback TV and in his spare time ran an infamous cricket team, the Captain Scott XI. He died in November 2005. Harry Thompson invented many TV comedy hits such as Have I Got News For You and Da Ali G Show. He was the author of several acclaimed bestsellers, including PETER COOK: A BIOGRAPHY and PENGUINS STOPPED PLAY, as well as a historical novel, THIS THING OF DARKNESS which was shortlisted for the Booker Prize. He worked as a producer at Talkback TV and in his spare time he ran the infamous cricket team, the Captain Scott XI. Harry Thompson died in 2005.
GOR000293384
9780719563461
0719563461
Penguins Stopped Play by Harry Thompson
Harry Thompson
Used - Very Good
Paperback
Hodder & Stoughton General Division
2007-04-05
320
Short-listed for British Book Awards: Sports Book of the Year 2007
Book picture is for illustrative purposes only, actual binding, cover or edition may vary.
This is a used book - there is no escaping the fact it has been read by someone else and it will show signs of wear and previous use. Overall we expect it to be in very good condition, but if you are not entirely satisfied please get in touch with us
Trustpilot