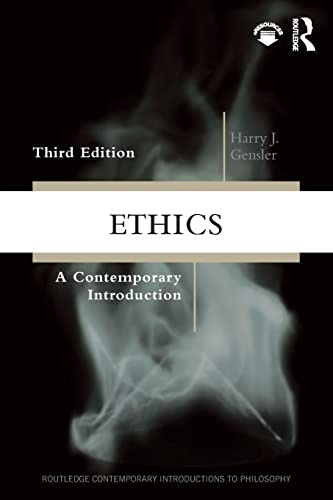 Ethics: A Contemporary Introduction introduces the issues and controversies of contemporary moral philosophy. It gets students to struggle with the big questions of morality while it also relates these questions to practical issues, especially racism, global warming, moral education, and abortion. Providing a practical method for thinking about moral issues-a method based largely on the golden rule-it is written simply and clearly throughout. College students who are new to philosophy or who have already taken an introductory-level course will benefit from its use.

Key Additions to the Third Edition:

"No one weds philosophical rigor to undergraduate pedagogy like Gensler. His comprehensive explanations remain exceptionally accessible for any reader, while the addition of optional sections on advanced topics and greater emphasis on issues like global warming and multiculturalism have amplified the book's instructional power."

"A broad and keen scholar and an engaging and crystal-clear teacher, Harry Gensler introduces ethics with an approach that is truly fresh. He shows how the golden rule of treating others only in ways that are consistent with how we want to be treated can be developed into a rational framework for ethics; and he treats an ample range of problems in theoretical and applied ethics."

"Harry Gensler's Ethics: A Contemporary Introduction is one of the very best books of its kind. It is widely used and has been translated into four different languages. This new and improved version of Gensler's textbook is notable for its clarity and rigor. It is particularly helpful in the way it sets out strong arguments for and against many important views and theories. Students who use this book will learn a great deal about logic and critical thinking."

"Fr. Gensler makes significant modifications to his Second Edition in this his Third Edition of his incisive introduction to philosophy. He retains his focus on the golden rule, but now applies its ethical reasoning to more cases and also includes more advanced topics. Students will benefit in particular from the upgraded Ethicola instructional program that is included with the text."

Harry J. Gensler, S.J., is Professor of Philosophy at Loyola University Chicago. Some of his other books include Formal Ethics (1996), Ethics: Contemporary Readings (2004), Anthology of Catholic Philosophy (2005), Historical Dictionary of Logic (2006), Historical Dictionary of Ethics (2008), Ethics and the Golden Rule (2013), Ethics and Religion (2016), and Introduction to Logic, Third Edition (2017).

GOR009211609
9780815378679
081537867X
Ethics: A Contemporary Introduction by Harry J Gensler (John Carroll University, USA)
Harry J Gensler (John Carroll University, USA)
Routledge Contemporary Introductions to Philosophy
Used - Very Good
Paperback
Taylor & Francis Inc
2017-12-07
244
N/A
Book picture is for illustrative purposes only, actual binding, cover or edition may vary.
This is a used book - there is no escaping the fact it has been read by someone else and it will show signs of wear and previous use. Overall we expect it to be in very good condition, but if you are not entirely satisfied please get in touch with us
Trustpilot