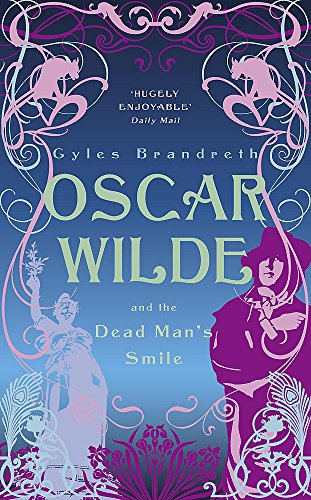 Oscar Wilde and the Dead Man's Smile by Gyles Brandreth

Paris, 1883. Oscar Wilde, aged twenty-seven, has come to the city of decadence to discover its charms, to rekindle his friendship with the divine Sarah Bernhardt and to collaborate with France's most celebrated actor-manager, Edmond La Grange.
Oscar discovers dark secrets lying at the heart of the La Grange company, and is confronted by murders both foul and bizarre. To solve the crimes, to unravel the mystery, Oscar risks his life - and his reputation - embarking on a dangerous adventure that takes him from bohemian night clubs to an asylum for the insane, from a duel in the Buttes de Chaumont to the gates of Reading Gaol.

'The atmosphere and setting are lovely and exquisitely recreated by an author who has an intimate knowledge of the world he describes ... I won't reveal the denouement, but I can assure readers that the author knows exactly what he's doing' * Tangled Web *
'It's a great book ... there's enough wit and intelligence here to make it more than a 'guilty pleasure' ... an intelligent read with good characterisation' * Scotsman *
'Highly acclaimed Oscar Wilde series ... excellent writing ... it's a fun book that introduces you to many interesting characters ... a light-hearted and entertaining murder mystery' * Irish Post *
'An entertaining yarn - easy and pleasing to read - with an extensive set of vivid characters' * Gay times *
Praise for Gyles Brandreth's Oscar Wilde series: * *** *
One of the most intelligent, amusing and entertaining books of the year. If Oscar Wilde himself had been asked to write this book he could not have done it any better.' * Alexander McCall Smith *
Genius . . . Wilde has sprung back to life in this thrilling and richly atmospheric new novel. . .The perfect topography for crime and mystery . . . magnificent . . . an unforgettable shocker about sex and vice, love and death * Sunday Express *
Very funny * Independent on Sunday *
Both a romp through fin-de-siecle London . . . and a carefully researched portrait of Oscar Wilde . . . Very entertaining * Literary Review *
A fine and sympathetic writer * The Times Literary Supplement *
Brandreth has poured his considerable familiarity with London into a witty fin de siecle entertainment, and the rattlingly elegant dialogue is peppered with witticisms uttered by Wilde well before he ever thought of putting them into his plays * Sunday Times *
Gyles Brandreth and Oscar Wilde seem made for one another . . . There is much here to enjoy . . . the complex and nicely structured plot zips along. * Daily Telegraph *
Not merely, like all the best after-dinner speakers, does he know how to spin a yarn; unlike most politicians, he has a touching access to the secrets of the human heart * The Times *
He can tell a story in the way Daphne du Maurier could . . . He creates a world and keeps you there * Sunday Express *
'The third in an enjoyable, well-researched series' * Sunday Mercury *
Gyles Brandreth is a writer, performer, former MP and government whip whose career has ranged from hosting Have I Got News For You to starring in his own award-winning musical revue in London's West End. Currently a reporter with The One Show on BBC1 and a regular on Radio 4's Just a Minute, his acclaimed Victorian detective stories - The Oscar Wilde Murder Mysteries - are now being published in nineteen countries around the world and are currently in development for TV. All six books in the series, Oscar Wilde and the Candellight Murders, Oscar Wilde and the Ring of Death, Oscar Wilde and the Dead Man's Smile, Oscar Wilde and the Nest of Vipers, Oscar Wilde and the Vatican Murders and Oscar Wilde and the Murders at Reading Gaol are available from John Murray. You can find out more about the Oscar Wilde Murder Mysteries at www.oscarwildemurdermysteries.com and at www.johnmurray.co.uk and about Gyles at www.gylesbrandreth.net
GOR001855467
9780719569210
0719569214
Oscar Wilde and the Dead Man's Smile: Oscar Wilde Mystery: 3 by Gyles Brandreth
Gyles Brandreth
Oscar Wilde Mystery
Used - Good
Paperback
Hodder & Stoughton General Division
2009-05-14
384
N/A
Book picture is for illustrative purposes only, actual binding, cover or edition may vary.
This is a used book - there is no escaping the fact it has been read by someone else and it will show signs of wear and previous use. Overall we expect it to be in good condition, but if you are not entirely satisfied please get in touch with us
Trustpilot