The Discovery of France Graham Robb 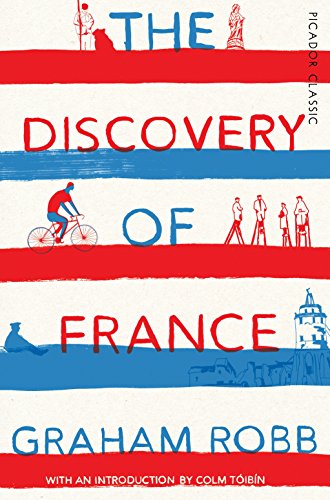 The Discovery of France by Graham Robb

Winner of both the Duff Cooper and the Royal Society of Literature Ondaatje prizes, The Discovery of France is full of quirky anecdotes and sketches of people, places and customs.

The Discovery of France by Graham Robb

With an introduction by Colm Toibin.

Ten years ago, I began to explore the country on which I was supposed to be an authority . . .

France is a country famous for its intellectuals, its philosophers and writers, its fashion, food and wine. And yet the notion of 'the French' as one nation is relatively recent and - historically speaking - quite misleading. In order to discover the 'real' past of France, Graham Robb realized it was not only necessary to go back in time, but also to go at a slower pace than modern life generally allows. The Discovery of France, illuminating, engrossing and full of surprises, is the result of Robb's 14,000 mile journey across France on a bicycle.

Winner of both the Duff Cooper and the Royal Society of Literature Ondaatje prizes, The Discovery of France is a modern non-fiction classic, a literary exploration of a remarkable nation. From maps and migration to magic, language and landscape, it reveals a France few will recognize.

Exhilarating . . . With gloriously apposite facts and an abundance of quirky anecdotes and thumbnail sketches of people, places and customs, Robb, on brilliant form, takes us on a stunning journey through the historical landscape of France * Independent *
This splendid history of France mixes the rambling charm of a traveller with a scholar's rigorous research . . . At once history, psychogeography, itinerary and cabinet of curiosities, The Discovery of France is an astute sociological catalogue of France's changing idea of itself . . . It's [also] an extraordinary journey of discovery that will delight even the most indolent armchair traveller * Daily Telegraph *
Robb's concise and fast-paced writing pedals along with never a dull paragraph, as facts, events, characters and quotations flash by . . . This book is an elegy to what has disappeared, a retrospective exploration of that lost world. But the British love affair with France makes this particular story special, and Robb, from his two-wheeled vantage point, has made a dazzling and moving contribution to a long tradition * Sunday Times *
It is an astonishing, eccentric book that defies linear narrative to detour, circle back, swerve and dodge between the centuries. Robb carries the reader along on flawless prose, over France's terra incognita, probing, discovering, and getting to know a country still deeply at odds with itself. There is information in this book to surprise even the most avid Francophile, and to delight anyone who is even vaguely thinking of boarding the new Eurostar * The Times *
As an alternative view of French history it is a fascinating diversion. Its real value lies in helping to explain why modern France remains a centrally directed society that has adopted big ideas and bloody ideals in order to create itself. * Daily Mail *
It is beautifully written and truly eccentric, seeking out the obscure or forgotten parts of a nation that - Robb argues brilliantly - is still discovering itself. * Times Literary Supplement *
Writing with humour but without condescension, with understanding but without naivety, Robb brilliantly reconstructs a world we have lost. There is hardly a page that does not contain a detail that is illuminating, surprising or entertaining, and often all three. * Sunday Telegraph *
Elegant, entertaining and occasionally brilliant . . . As this book powerfully demonstrates, French history is nothing if not built on paradox and contradiction. Most importantly, Robb reminds us why France still matters. * Observer *
Graham Robb was born in Manchester in 1958 and is a former fellow of Exeter College, Oxford. He has published widely on French literature and history. His 2007 book The Discovery of France won both the Duff Cooper and Royal Society of Literature Ondaatje Prizes. For Parisians the City of Paris awarded him the Grande Medaille de la Ville de Paris. He lives on the English-Scottish border.
Section - i: List of Illustrations Section - ii: Maps Section - iii: Itinerary Chapter - 1: The Undiscovered Continent Chapter - 2: the Tribes of France, I Chapter - 3: The Tribes of France, II Chapter - 4: O Oc Si Bai Ya Win Oui Oyi Awe Jo Ja Oua Chapter - 5: Living in France, I: The Face in the Museum Chapter - 6: Living in France, II: A Simple Life Chapter - 7: Fairies, Virgins, Gods and Priests Chapter - 8: Migrants and Commuters Unit - INTERLUDE: The Sixty Million Others Chapter - 9: Maps Chapter - 10: Empire Chapter - 11: Travelling in France, I: The Avenues of Paris Chapter - 12: Travelling in France, II: The Hare and the Tortoise Chapter - 13: Colonization Chapter - 14: The Wonders of France Chapter - 15: Postcards of the Natives Chapter - 16: Lost Provinces Chapter - 17: Journey to the Centre of France Section - iv: Epilogue: Secrets Section - v: Chronology Section - vi: Notes Section - vii: Works Cited Index - viii: General Index Index - ix: Geographical Index Acknowledgements - x: Acknowledgements
GOR007721101
9781509803484
1509803483
The Discovery of France by Graham Robb
Graham Robb
Picador Classic
Used - Very Good
Paperback
Pan Macmillan
2016-02-25
496
Winner of Duff Cooper Prize 2008 (UK) Long-listed for BBC Four Samuel Johnson Prize 2008 (UK)
Book picture is for illustrative purposes only, actual binding, cover or edition may vary.
This is a used book - there is no escaping the fact it has been read by someone else and it will show signs of wear and previous use. Overall we expect it to be in very good condition, but if you are not entirely satisfied please get in touch with us
Trustpilot