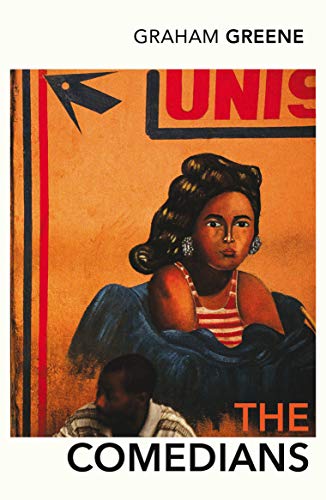 The Comedians by Graham Greene

WITH AN INTRODUCTION BY PAUL THEROUX

Three men meet on a ship bound for Haiti, a world in the grip of the corrupt 'Papa Doc' and the Tontons Macoute, his sinister secret police. And, to begin with, they are men afraid of love, afraid of pain, afraid of fear itself...

The Comedians by Graham Greene

WITH AN INTRODUCTION BY PAUL THEROUX

Three men meet on a ship bound for Haiti, a world in the grip of the corrupt 'Papa Doc' and the Tontons Macoute, his sinister secret police. Brown the hotelier, Smith the innocent American and Jones the confidence man - these are the 'comedians' of Graham Greene's title. Hiding behind their actors' masks, they hesitate on the edge of life. And, to begin with, they are men afraid of love, afraid of pain, afraid of fear itself...

Graham Greene (Author)
Graham Greene was born in 1904. He worked as a journalist and critic, and in 1940 became literary editor of the Spectator. He was later employed by the Foreign Office. As well as his many novels, Graham Greene wrote several collections of short stories, four travel books, six plays, three books of autobiography, two of biography and four books for children. He also wrote hundreds of essays, and film and book reviews. Graham Greene was a member of the Order of Merit and a Companion of Honour. He died in April 1991.

Paul Theroux (Introducer)
Paul Theroux was born in Medford, Massachusetts, in 1941, and published his first novel, Waldo, in 1967. He wrote his next three novels, Fong and the Indians, Girls at Play and Jungle Lovers, after a five-year stay in Africa. He subsequently taught at the University of Singapore, and during his three years there produced a collection of short stories, Sinning with Annie, and highly praised novel Saint Jack. His other publications include The Black House (1974), a novel; The Great Railway Bazaar: By Train Through Asia (1975), an account of his journey by train from London to Tokyo and back; The Family Arsenal (1976); The Consul's File (1977); Picture Palace (1978; winnner of the Whitread Literary Award); A Christmans Card (1978; The Old Patagonian Express (1979); World's End and Other Stories (1980); London Snow (1980); The Mosquito Coats, which was the Yorkshire Post Novel of the Year for 1981 and the joint winner of the James Tait Black Memorial Prize; The London Embassy (1982); The Kingdom by the Sea (1983); Doctor Slaughter (1985); Sunrise with Seamonsters (1985); The Imperial Way (1985); O-Zone (1986); Riding the Iron Rooster (1988); My Secret History (1989) and Chicago Loop (1990).

Paul Theroux is married with two children and divides his time between London and Cape Cod.

GOR001900060
9780099478379
0099478374
The Comedians by Graham Greene
Graham Greene
Used - Very Good
Paperback
Vintage Publishing
2004-10-07
320
N/A
Book picture is for illustrative purposes only, actual binding, cover or edition may vary.
This is a used book - there is no escaping the fact it has been read by someone else and it will show signs of wear and previous use. Overall we expect it to be in very good condition, but if you are not entirely satisfied please get in touch with us
Trustpilot