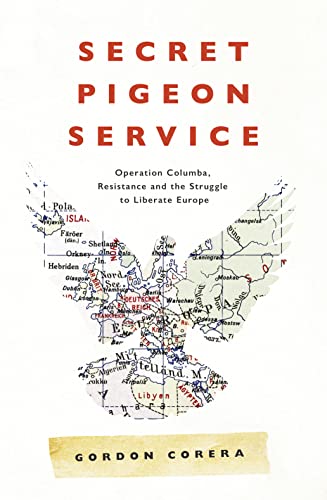 Gordon Corera uses declassified documents and extensive original research to tell the story of MI14(d) and the Secret Pigeon Service for the first time.

`This is an amazing story' Simon Mayo, BBC Radio 2

Gordon Corera uses declassified documents and extensive original research to tell the story of MI14(d) and the Secret Pigeon Service for the first time.

`This is an amazing story' Simon Mayo, BBC Radio 2

Between 1941 and 1944, sixteen thousand plucky homing pigeons were dropped in an arc from Bordeaux to Copenhagen as part of 'Columba' - a secret British operation to bring back intelligence from those living under Nazi occupation. The messages flooded back written on tiny pieces of rice paper tucked into canisters and tied to the legs of the birds. Authentic voices from rural France, the Netherlands and Belgium - they were sometimes comic, often tragic and occasionally invaluable with details of German troop movements and fortifications, new Nazi weapons, radar system or the deployment of the feared V-1 and V-2 rockets that terrorized London.

Who were the people who provided this rich seam of intelligence? Many were not trained agents nor, with a few exceptions, people with any experience of spying. At the centre of this book is the `Leopold Vindictive' network - a small group of Belgian villagers prepared to take huge risks. They were led by an extraordinary priest, Joseph Raskin - a man connected to royalty and whose intelligence was so valuable it was shown to Churchill, leading MI6 to parachute agents in to assist him.

A powerful and tragic tale of wartime espionage, the book brings together the British and Belgian sides of the Leopold Vindictive's story and reveals for the first time the wider history of a quirky, quarrelsome band of spy masters and their special wartime operations, as well as how bitter rivalries in London placed the lives of secret agents at risk. It is a book not so much about pigeons as the remarkable people living in occupied Europe who were faced with the choice of how to respond to a call for help, and took the decision to resist.

`An amazing story... Well-researched and well-told, as much about humans as pigeons, it is replete with eccentric Englishmen, ruthless Nazis, and brave resisters in occupied Europe who risk their lives for the Allied cause.' Nicholas Reynolds, author of Writer, Sailor, Soldier, Spy

`Once you've read this book you'll never look at a pigeon disdainfully again...As I read it, I found myself muttering, again and again, the World War II expression: "It's too fantastic." It really is ... No Frederick Forsyth thriller could be as gripping as this real-life story ... Corera's gripping book is an intoxicating mixture of comedy and high seriousness' Daily Mail

`Corera is to be congratulated for bringing to light, with humour and verve, a virtually unknown chapter of the war' Daily Telegraph

Gordon Corera has been the BBC's National Security Correspondent since 2004. He has reported from London, Moscow and Washington and is the only journalist to have interviewed serving heads of both the CIA and MI6. He has covered first hand many of the central episodes in the spy-wars between the three countries. He is the author of several books including `MI6: Life and Death in the British Secret Service' and has presented BBC documentaries about MI6, the CIA and Russia.

GOR009159823
9780008220303
0008220301
Secret Pigeon Service: Operation Columba, Resistance and the Struggle to Liberate Europe by Gordon Corera
Gordon Corera
Used - Very Good
Hardback
HarperCollins Publishers
2018-01-22
336
N/A
Book picture is for illustrative purposes only, actual binding, cover or edition may vary.
This is a used book - there is no escaping the fact it has been read by someone else and it will show signs of wear and previous use. Overall we expect it to be in very good condition, but if you are not entirely satisfied please get in touch with us
Trustpilot