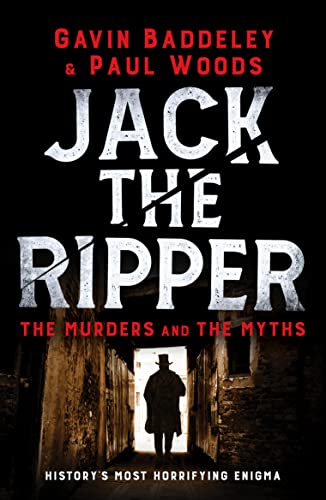 Jack the Ripper by Gavin Baddeley

Jack the Ripper: The Murders and the Myths by Gavin Baddeley

Five brutal murders shocked London in the summer and autumn of 1888. They have never been forgotten.

The Jack the Ripper case has never been solved - the killer remains a blood-spattered silhouette. Although 'Jack' as an entity was almost certainly invented by an unscrupulous journalist, he became an archetype - decked in the top hat and cloak of a Victorian melodrama villain, stalking the fog-wreathed streets of the old East End. The numerous Ripper theories which emerged at the time tell us more about Victorian attitudes than they do about the killer's true identity.

In Jack the Ripper the authors follow the grim homicidal trails that have permeated popular culture since the Whitechapel murders of 1888. It tells the victim's stories in all their desperate poignancy, and explores the theories and suspects of the burgeoning field of 'ripperology'. Conspiracy theories and myths that swirl around the case to this day, from black magicians to the royal family, are considered, as is the modern forensic view of the Ripper murders as sex crimes, with reference to disturbing modern cases such as that of the 'Plumstead Ripper'.

Terrifying and unignorable, this is the ultimate book on Jack the Ripper.

Gavin Baddeley is an experienced author and journalist who has worked for The Observer and Metal Hammer. He is the occult authority for the BBC and Channel 4. Paul Woods is a journalist and author of numerous books of true crime.
GOR012506865
9781800329898
180032989X
Jack the Ripper: The Murders and the Myths by Gavin Baddeley
Gavin Baddeley
Used - Very Good
Paperback
Canelo
2022-06-13
368
N/A
Book picture is for illustrative purposes only, actual binding, cover or edition may vary.
This is a used book - there is no escaping the fact it has been read by someone else and it will show signs of wear and previous use. Overall we expect it to be in very good condition, but if you are not entirely satisfied please get in touch with us
Trustpilot