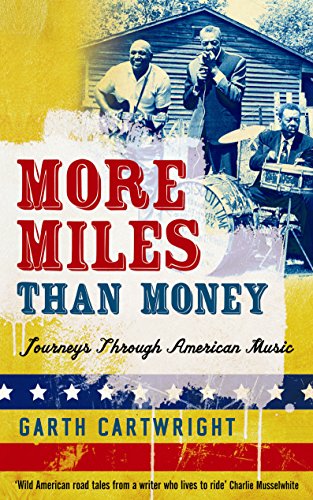 Takes you on a journey through the backwoods of American music. This book sets out to see whether the American roots music that the author loved - blues and country, folk and soul - was still alive in the twenty-first century.

Armed only with a Greyhound ticket and enough money for his next beer, Garth Cartwright set out to see whether the American roots music he loved - blues and country, folk and soul - was still alive in the twenty-first century. His journey took him from the LA bus station to the Mexican cantinas of San Antonio, the Indian reservations of New Mexico to the last surviving juke joints of Highway 61. Along the way he meets an exotic mix of surviving legends - from soul diva Mabel John to the queen of Mexican American song Lydia Mendoza, funk pioneer Charles Wright to country troubadour Billy Joe Shaver - plus a supporting cast of cowboy poets, down and out bluesmen and a feller called Lee who becomes Cartwright's co-pilot for an epic drive across the deserts of the South-West. A remarkable piece of travel writing and an introduction to the real stars of Americana.
Wild American road tales from a writer who lives to ride -- Charlie Musselwhite
Garth Cartwright takes you on a quixotic trek down the dirt roads of American music. This book is part thriller, part adventure story, part mystery tale - in sum, a secret history of roots music as heard only in near-forgotten juke joints, honky tonks, roadhouses, East L.A. barrios, and yes, even churches. Reading his passionate prose, you can almost smell the catfish frying, taste the white whiskey, and feel that bassline pounding away -- Michael Dregni, author of Django: the Life & Times of a Gypsy Legend
Praise for Princes Amongst Men (9781842424831): Excellent... what distinguishes Cartwright is his style, his verve and his whole-hearted engagement with his subject * Guardian *
Brilliant... will capture the imagination of any would-be traveller... An irresistible combination of travelogue and search for human roots * Sunday Express *
Cartwright has a writer's eye for detail and a musician's dedication to late-night adventures... he is good at documenting the road-trip element of his story... gets into the heart of an often obscured side of America... [and] writes with spirit. -- Clover Stroud * Sunday Telegraph *
A terrifically enjoyable read by a true writer... will have you hooked in seconds...The best music book since Nik Cohn's Tricksta. -- Charlie Gillett * www.charliegillett.com *
Shot through with the Beat spirit of adventure, Cartwright throws himself toward the rawest, juiciest slices of American life - whether hitching through the Arizona desert to canoeing down the swampy Mississippi. -- Adam Forrest * The Big Issue *
[A]nyone with even the slightest interest in music and Americana will find something here to whet the appetite -- Dan Collins * Irish Examiner *
His empathetic descriptions of under-appreciated musicians are engrossing, inspiring and frequently heartbreaking. -- Andrzej Lukowski * Metro *
Taking in country balladeers, outlaw poets and soul divas, it's an On The Road for the 21st-century, a journey to the very frontiers of the American spirit. -- Simon Evans * Choice *
A seductive reminder of the mystic energy of the US highway. With a Greyhound ticket and a restless soul, Cartwright writes about troubadours, divas and country poets in prose as sassy and lyrical as his subjects -- N/A * Wanderlust *
A compelling insight into the plight of endangered musical traditions battling ferociously to survive in an increasingly homogenised and philistine world. -- Michael Quinn * Rock'n'Reel *
Enjoyable modern-day odyssey. -- Terry Staunton * Record Collector *
Gritty, diary-like read... Read this and you'll want to exhaust yourself trying to find the heart of authentic American music just like Cartwright did. -- Jon Newey * Jazzwise *
A good read! -- Paul Jones * BBC Radio 2 *
Insightful...will leave you feeling as if you were tucked away in his backpack... his energy and ease of description will engage the avid traveller and the serious music lover alike. -- Ruth Harrison * Real Travel *
A steering-wheel-gripping, ear-bending, gut-twisting mission around North America... You feel like you're a passenger in his dust-licked rental car... you get hooked, like a petrol-head on his high-octane prose... Kerouac's poetic, hyperactive spirit darts in and out Cartwright's writing...an exhilarating read. -- Lucy Wilson * Songlines *
A Kiwi Kerouac... More Miles is that rare thing - a book with real soul. -- Jamie Renton * Straight No Chaser *
Cartwright's writing is by turns entertainingly subjective and factually direct... expressed in both close-up detail and panoramic sweep... compelling. -- Sharon O'Connell * Time Out *
This opinionated travelogue turns out to be a surprisingly crafty and engaging book -- Philip Matthews * The Dominion Post Weekend, NZ *
New Zealand born, South London based, wanderer by inclination, Garth Cartwright is best known for his 2005 book Princes Amongst Men: Journeys With Gypsy Musicians (Serpents Tail). He left school at 16, tried his hand at professional skateboarding, singing in punk bands, promoting concerts and even had a brief sojourn as a boxer, before turning to writing full time. In 1995 he won the Guardian Music Writing Award. He has written for the Guardian, Telegraph, Independent On Sunday, The Times, Time Out, Uncut, Folk Roots, and a multitude of international publications.
GOR002676813
9781846686870
1846686873
More Miles Than Money: Journeys Through American Music by Garth Cartwright
Garth Cartwright
Used - Very Good
Paperback
Profile Books Ltd
2009-10-08
400
N/A
Book picture is for illustrative purposes only, actual binding, cover or edition may vary.
This is a used book - there is no escaping the fact it has been read by someone else and it will show signs of wear and previous use. Overall we expect it to be in very good condition, but if you are not entirely satisfied please get in touch with us
Trustpilot