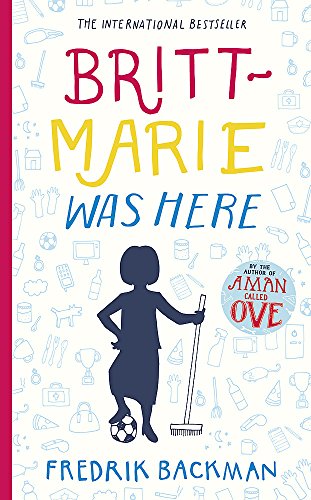 Britt-Marie Was Here by Fredrik Backman

The number 1 European bestseller by the author of the international phenomenon A Man Called Ove, Britt-Marie was Here is a funny, poignant and uplifting tale of love, community, and second chances.

Britt-Marie Was Here by Fredrik Backman

For as long as anyone can remember, Britt-Marie has been an acquired taste. It's not that she's judgemental, or fussy, or difficult - she just expects things to be done in a certain way. A cutlery drawer should be arranged in the right order, for example (forks, knives, then spoons). We're not animals, are we?

But behind the passive-aggressive, socially awkward, absurdly pedantic busybody is a woman who has more imagination, bigger dreams and a warmer heart than anyone around her realizes.

So when Britt-Marie finds herself unemployed, separated from her husband of 20 years, left to fend for herself in the miserable provincial backwater that is Borg - of which the kindest thing one can say is that it has a road going through it - and somehow tasked with running the local football team, she is a little unprepared. But she will learn that life may have more to offer her that she's ever realised, and love might be found in the most unexpected of places.

The number 1 European bestseller by the author of A Man Called Ove, Britt-Marie was Here is a funny, poignant and uplifting tale of love, community, and second chances.

This is an author who understands people and watches society closely.... An author who specialises in the unforgettable, outdoes himself and in the process overshoots our rating system.... In the end 5*s are all I can offer but I feel that this is a novel that deserves many, many more. * Bookbag *
Impressive [and] heart-warming... there are unexpected delights to being stuck with Britt-Marie. * Literary Review *
A brilliant mix of belly-laughs, profound insight and captivating events delivered... with Backman's pitch-perfect dialogue and an unparalleled understanding of human nature. * Shelf Awareness *
The bestselling author of A MAN CALLED OVE returns with this heartwarming story about a woman rediscovering herself after personal crisis. Backman reveals Britt-Marie's need for order....with clear, tight descriptions. Insightful and touching, this is a sweet and inspiring story about truth and transformation. Fans of Backman's will find another winner in these pages. * Publishers Weekly *
Fredrik Backman is a Swedish blogger, columnist and author. His debut novel A MAN CALLED OVE was a number 1 bestseller across Scandinavia, has sold over one million copies worldwide, was a Richard & Judy summer read in the UK and an instant New York Times paperback bestseller, and has been made into an acclaimed film. Fredrik's subsequent novels, MY GRANDMOTHER SENDS HER REGARDS AND APOLOGISES and BRITT-MARIE WAS HERE, also went straight to number 1 in Sweden on publication.
CIN000821100
9781473617216
1473617219
Britt-Marie Was Here by Fredrik Backman
Fredrik Backman
Used - Very Good
Paperback
Hodder & Stoughton
2016-04-26
304
N/A
Book picture is for illustrative purposes only, actual binding, cover or edition may vary.
This is a used book - there is no escaping the fact it has been read by someone else and it will show signs of wear and previous use. Overall we expect it to be in very good condition, but if you are not entirely satisfied please get in touch with us
Trustpilot