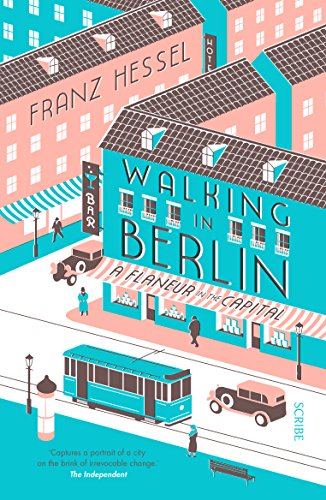 Walking in Berlin by Franz Hessel

Walking in Berlin: a flaneur in the capital by Franz Hessel

Take a walk around 1920s Berlin with one of its greatest luminaries.

In this timeless guide, originally published in Germany in 1929, Franz Hessel invites his readers to join him on a stroll through Weimar-era Berlin, taking in some of the most fascinating sights the city has to offer, many of which still exist in some form today.

From the Alexanderplatz to Kreuzberg, his record of them has become priceless; as has his fascinating commentary on the seismic shifts shaking German culture at the time.

Superbly written, and as fresh today as when it first appeared, this is a book to be savoured.

'Like a private invitation back to the city's most beguiling era ... Irreverent and yet always enthusiastic, [Hessel's] 88-year-old love letter to this city is a true map of the traces of a bygone world.'

'Captures a portrait of a city on the brink of irrevocable change ... Hessel was both detailed chronicler of the present, and a man keenly aware of the city's history ... Apt then that Walking in Berlin now joins this historical hall of fame.'

'[Walking in Berlin] is not only an important record of old Berlin; it is a testimony to its enduring spirit.'

'Hessel's conversational style and subtle insights evoke Weimar Berlin and reveal a great deal about the Germany of his days.'

'Walking in Berlin is a magical mystery tour of a city on the brink of upheaval. Hessel may have wandered haphazardly but he wrote with purpose, never once losing his way.'

'Hessel is a modest master of spontaneous observation.'

'Hessel's warm enthusiasm for his home town informs every page, and provides the reader with a geographical guide that still holds value, despite the enormous changes in the city. More than that, though, it evokes a time that, although just about within living memory, seems almost as remote as the nineteenth-century Berlin of Schinkel.'

'To this day, there is no better Berlin travel guide.'

'Beautiful ... a classic observation of the German city in the late 1920s that illuminates many of the historic shadows and provides a wonderful map for modern-day wanderings.'

'When you think of Berlin in the 1920s, you cannot avoid thinking of the storyteller, critic and translator Franz Hessel.'

'Walking in Berlin can be read lightly as a postcard from the past; it should be read seriously as an inexhaustible record of all that Berlin was and might have been, as an enthralling guide to a wealth of references, sidetracks, lost paths ... This is a first encounter with the myth and the reality of that intangible fantastic beast of a city.'

'Hessel is a feisty, clever, and witty guide to Berlin; his prose is animated and sumptuous and his perceptions glamorously lyrical. For anyone who knows the geography of Berlin, this book is an especial treat.'

'A timely ode to a good meander and [Hessel's] home city [Berlin].'

'Hessel's wanderings in the Weimar-era German capital mix social commentary with artistic and architectural analysis ... his musings offer a fresh set of eyes.'

'[A] sprawling panorama of cultural memory and miscellany, a vibrant catalog of metropolitan life, and a seismograph of a city on the verge of disaster.'

* Los Angeles Review of Books *
Franz Hessel was born in 1880 to a Jewish banking family, and grew up in Berlin. After studying in Munich, he lived in Paris, moving in artistic circles in both cities. His relationship with the fashion journalist Helen Grund was the inspiration for Henri-Pierre Roche's novel and, later, Francois Truffaut's film Jules et Jim. Their son Stephane went on to become a diplomat and author of the worldwide bestselling Indignez-Vous! (Time for Outrage!). He also co-translated Proust with Walter Benjamin, as well as works by Casanova, Stendhal, and Balzac. Franz Hessel died in early 1941, shortly after his release from an internment camp. Amanda DeMarco, is an editor, translator, and the founder of Readux Books. Originally from Chicago, she is currently based in Berlin.
GOR009692100
9781911344728
1911344722
Walking in Berlin: a flaneur in the capital by Franz Hessel
Franz Hessel
Used - Very Good
Paperback
Scribe Publications
2018-05-10
272
N/A
Book picture is for illustrative purposes only, actual binding, cover or edition may vary.
This is a used book - there is no escaping the fact it has been read by someone else and it will show signs of wear and previous use. Overall we expect it to be in very good condition, but if you are not entirely satisfied please get in touch with us
Trustpilot