The Swarm: A Novel of the Deep Frank Schatzing 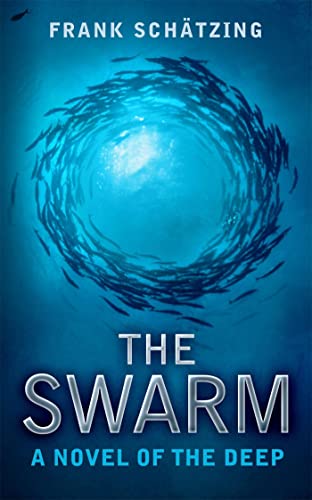 The Swarm: A Novel of the Deep by Frank Schatzing

The Swarm: A Novel of the Deep by Frank Schatzing

Frank Schatzing's amazing novel is a publishing phenomenon with translation rights sold around the world, drawing rave reviews for both pulsating suspense and great scientific knowledge.

The world begins to suffer an escalating and sensational series of natural disasters, and two marine biologists begin to develop a theory that the cause lies in the oceans, where an entity know as the Yrr has developed a massive network of single-cell organisms. It is wreaking havoc in order to prevent humankind from destroying the earth's ecological balance forever.

The Americans, under the ruthless General Judith Lee, take a more pragmatic approach than the scientists, seeking to wipe out the being of the deep.

The scene is set for a massive confrontation...

A suspense-packed ecological thriller * Financial Times *
This thriller is a space-ship bound for another world. * Die Zeit *
A rip-roaring monster movie of a plot with unexpectedly credible human characters * The Times *
An international blockbuster . . . But think twice about making it your beach book. However hot the vacation sun, this novel may give you the shivers . . . enjoy * Evening Standard *
Good fun, written in fluent thrillerese, and there are some vivid action-thriller moments * Metro *
An effervescent cocktail of adventure * Der Spiegel *
A gripping thriller starring nature unleashed * Stern *
A gigantic thriller * Die Welt *
'A massively good read. A gripping marine biodiversity thriller the like of which I have not seen since "Jaws". I particularly liked the portrayal of biologists as interesting, sexy human beings, rather than just evil or hopelessly mistaken gene-manipulators.' * Dr James Mallet, Professor of Biological Diversity, University College London *
A mind-bending, Crichton-esque fate-of-the-planet thriller that whiplashes the reader from micro- to macro-terrors faster than you can say 'ecosystem'... never ever predictable... enormously entertaining science fiction / horror epic... I recommend you dive right in * Fangoria *
A gripping novel with fast-paced action, interesting and believable characters, and a fascinating look into the uncharted depths of the ocean . . . Enthralling, I was on tenterhooks throughout . . . Comparable in quality to Stephen King, Martin Cruz Smith, and Elmore Leonard * Peter Constantine, award-winning translator of Thomas Mann's SIX EARLY STORIES *
The world could collapse around you [while reading DER SCHWARM], and you wouldn't notice. * Die Welt *
A monster of science-fiction, rich in facts * Stern *
After these 1000 breathtaking pages you see the sea with different eyes. * Focus *
This book wants to be read from beginning to end, morning, noon, and night. The outside world could disintegrate and the reader would not notice because of the spellbinding power of the collapsing world in Frank Schatzing's apocalyptic thriller. * Die Tageszeitung *
With THE SWARM, Frank Schatzing lifts the German suspense novel up to the international level. * Suddeutsche Zeitung *
THE SWARM must be read quickly because before the reader can finally get to sleep, he must wander far and wide before crossing the finish line happy but exhausted. . . .Whoever has read Frank Schatzing's novel will be thankful for every inch of dry land and will certainly avoid waterbeds. * Die Zeit *
With THE SWARM, Frank Schatzing competes with the likes of Michael Crichton. * Brigitte *
One thousand pages of extraordinarily stimulating mental images. At once intellectual and intoxicating, this novel is alarming, unnerving, and overwhelming in every respect. Its composition has a precise grasp on rhythm, language, and lustrous action scenes. * Koelner Stadt-Anzeiger *
Topical and thought-provoking * The Canberra Times *
Highly entertaining * The Daily Telegraph, Australia *
A timely warning and a jolly good read to boot * South Coast Register *
Schatzing may be telling a story that relies on his vast imagination, but the research he uses to back it up remains firmly in the realm of facts...fascinating * Herald Sun, Australia *
Having sold more than 800,000 copies in Germany, this riveting eco-thriller is well placed for a repeat performance in the English language. * Publishing News *
Frank Schatzing has made a career as a marketing executive as well as the author of several highly successful historical crime novels. THE SWARM (Der Schwarm) has topped the German bestseller charts since 2004.
GOR001219580
9780340920756
0340920750
The Swarm: A Novel of the Deep by Frank Schatzing
Frank Schatzing
Used - Very Good
Paperback
Hodder & Stoughton
2007-02-22
896
N/A
Book picture is for illustrative purposes only, actual binding, cover or edition may vary.
This is a used book - there is no escaping the fact it has been read by someone else and it will show signs of wear and previous use. Overall we expect it to be in very good condition, but if you are not entirely satisfied please get in touch with us
Trustpilot