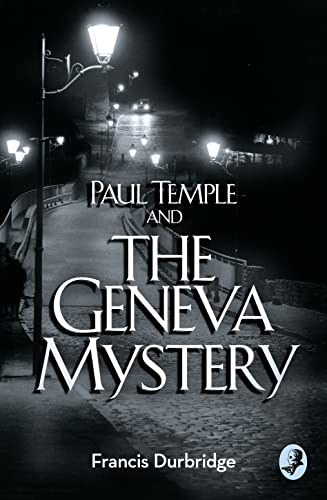 Paul Temple and the Geneva Mystery by Francis Durbridge

Paul and Steve are called upon to crack a case involving Carl Milbourne, the brother-in-law of wealthy financier Maurice Lonsdale. After the news that Carl has perished in a fatal car accident, rumours begin to stir that despite all odds, Carl is alive and well.

Paul and Steve are called upon to crack a case involving Carl Milbourne, the brother-in-law of wealthy financier Maurice Lonsdale. After the news that Carl has perished in a fatal car accident, rumours begin to stir that despite all odds, Carl is alive and well.

When Maurice's widowed Sister Margaret pleads for the crime-fighting duos help, Paul and Steve find themselves on a trail of deception stretching from London to Switzerland. Their lives are in grave danger as everything is done in an attempt to stall their search - anonymous gunmen, exploding cars, ransom demands, and a mysterious rendezvous that may prove to be the end of Paul and Steve...

'A classy period piece, all clipped accents, glamour and a smoking and drinking count to rival Mad Men. Great fun and surprisingly gripping.' -The Guardian

Francis Henry Durbridge was born 25th November 1912 in Hull, England. He was educated at Bradford Grammar School, where he was encouraged to write by his English teacher. He continued to do so while studying English at Birmingham University. After graduating in 1933, he worked for a short time as a stockbroker's clerk before selling a radio play, Promotion, to the BBC at the age of 21.

In 1938, Durbridge created the character Paul Temple, a crime novelist and detective. With Steve Trent, a Fleet Street journalist and later his wife, Temple solved numerous crimes in the glamorous world of the leisured middle classes, first on radio, then in films and, from 1969 to 1971, in a television series. In addition to the Paul Temple series, Durbridge wrote other mysteries for radio and television, many of which were also produced for German and Italian television and radio.
Durbridge also forged a successful career as a writer for the stage with seven plays, the last of which, Sweet Revenge, was written in 1991. He also wrote 43 novels, many of which were adapted from his scripts, sometimes with the help of others.

GOR007494080
9780008125721
0008125724
Paul Temple and the Geneva Mystery (A Paul Temple Mystery) by Francis Durbridge
Francis Durbridge
A Paul Temple Mystery
Used - Very Good
Paperback
HarperCollins Publishers
20151008
164
N/A
Book picture is for illustrative purposes only, actual binding, cover or edition may vary.
This is a used book - there is no escaping the fact it has been read by someone else and it will show signs of wear and previous use. Overall we expect it to be in very good condition, but if you are not entirely satisfied please get in touch with us
Trustpilot