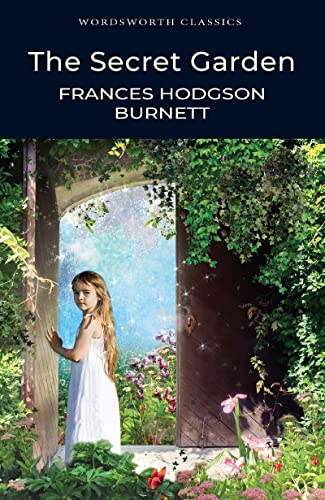 Mary Lennox was horrid, selfish and spoilt, and was sent to stay with her uncle in Yorkshire. She hated it. But when she finds the entrance to a secret garden a change overcomes her. With a local boy and her cousin the three children work magic in themselves and those around them.

Frances Burnett Hodgson's novel The Secret Garden is both intriguing and uplifting. It is regarded as one of the best children's books written in the twentieth century.

Mary Lennox, a sickly ten year old girl, adrift in the world after both her mother and father die is sent to Yorkshire to live with an uncle whom she has never met, at his isolated house, Misselthwaite Manor. Initially Mary is seen as a rude, aggressive and selfish child. She dislikes her new home and the people living in it. But now the scene is set for her transformation and the introduction of the author's engaging theme of rejuvenation and renewal. In exploring the grounds Mary finds the key to the locked garden which is neglected and overrun with weeds. She sets her mind to bringing it back to life. In doing so, Mary finds a purpose and an excitement in her lonely existence. However, apart from the garden, there are other secrets to be revealed at Misselthwaite Manor such as the strange cries in the night and the identity of Colin, a disabled boy, whom she discovers in the hidden bedroom.

The popularity of this novel bears witness to its universal appeal and its timeless hold on the imagination.

GOR009070108
9781840227543
1840227540
The Secret Garden by Frances Hodgson Burnett
Frances Hodgson Burnett
Wordsworth Classics
Used - Very Good
Paperback
Wordsworth Editions Ltd
2018-01-15
224
N/A
Book picture is for illustrative purposes only, actual binding, cover or edition may vary.
This is a used book - there is no escaping the fact it has been read by someone else and it will show signs of wear and previous use. Overall we expect it to be in very good condition, but if you are not entirely satisfied please get in touch with us
Trustpilot