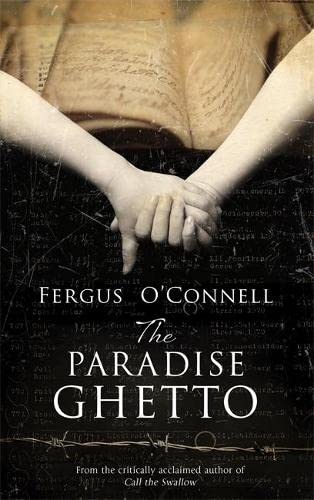 The Paradise Ghetto by Fergus O'connell

A powerful and impeccably crafted novel on the Holocaust and the effects of Nazi occupation during World War II from award-winning writer Fergus O'Connell.

The Paradise Ghetto by Fergus O'connell

A powerful story of hope, love, and imagination, set against the horrific backdrop of the Holocaust.

Two Jewish girls, Julia and Suzanne, are captured in Nazi-occupied Netherlands and transported to a ghetto. Although their world views are wildly different - Julia is jaded and bitter, Suzanne naive and optimistic - they become each other's closest confidants as they experience the horrors of the journey to 'The Paradise Ghetto'.

The young women use a precious smuggled notebook to write a story. As the book unfolds, it becomes the way they communicate their growing feelings for each other. But there comes a point when reality can no longer be held at bay. If the girls' names end up on the lists of deportees to Auschwitz there will be no return.

Is there a chance of escaping fate?

Fergus O'Connell is a world-renowned business management expert who has lectured at a number of universities across the world. His non-fiction title, Simply Brilliant, was runner-up in the WH Smith Book Awards 2002, and his debut novel Call the Swallow was shortlisted for the 2002 Irish Fiction Prize and nominated for the Sunday Independent Novel of the Year.
GOR008105010
9781786150431
1786150433
The Paradise Ghetto by Fergus O'connell
Fergus O'connell
Used - Like New
Paperback
Headline Publishing Group
2017-03-02
384
N/A
Book picture is for illustrative purposes only, actual binding, cover or edition may vary.
The book has been read, but looks new. The book cover has no visible wear, and the dust jacket is included if applicable. No missing or damaged pages, no tears, possible very minimal creasing, no underlining or highlighting of text, and no writing in the margins
Trustpilot