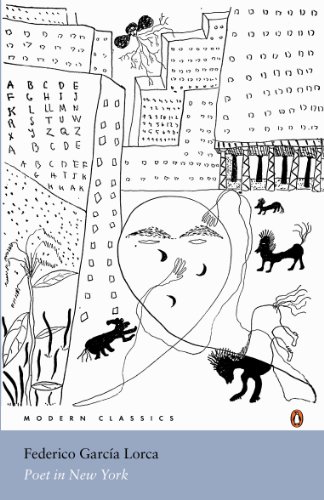 Features a poem expressing tortured feelings of alienation and dislocation. This book also offers translations of the poet's letters as well as a lecture he gave about this work. It is illustrated with archive photographs.

'There has been no more terribly acute critic of America than this steel-conscious and death-conscious Spaniard, with his curious passion for the modernities of nickel and tinfoil and nitre . . .' So wrote Conrad Aiken of Lorca's violent response to the New York he encountered as a student at Columbia University in 1929 and 1930. Born and brought up in Andalusia, Lorca's reaction to the brutality and loneliness of the vast city was one of amazement and indignation. His poetry moved away from the lyricism of the early Romanceros and became a vehicle for experimental techniques through which he expressed tortured feelings of alienation and dislocation. Based on a new edition of the original text, Greg Simon's and Steven White's new translation brings to life Lorca's arresting imagery. Christopher Maurer, a leading authority on Lorca's work, provides an enlightening introduction placing Poet in New York in context, and there are translations of Lorca's letters as well as a lecture he gave about the work. Illustrated with archive photographs, this comprehensive volume will make Lorca's masterpiece available to a whole new generation of readers.

Federico Garcia Lorca was born into an educated family of small landowners in Fuente Vaqueros in 1898. A poet, dramatist, musician and artist, he attended the university at Granada, where he acquired a fine knowledge of literature. In 1919 he went to the Residencia de Estudiantes in Madrid and during his long stay there he met all the principal writers, critics and scholars who visited the place, which was then a flourishing centre of cultural liberalism. In 1928 his Gipsy-Ballad Book (Romancero gitano) received much public acclaim. In 1929 he went to New York with Fernando de los Rios and his volume of poems Poet in New York (Poeta en Nueva York) was published posthumously in 1940.

On his return to republican Spain, he devoted himself to the theatre, as co-director of La Barraca, a government-sponsored student theatrical company that toured the country. He now wrote fewer poems, but these include his masterpiece Lament for Ignacio Sanchez Mejias (Llanto por la muerte de Ignacio Sanchez Mejias, 1935), a lament for a dead bullfighter. He wrote classical plays, pantomimic interludes, puppet plays, La zapatera prodigiosa (1930) and three tragedies: Blood Wedding (Bodas de sangre, 1933), Yerma (1934) and The House of Bernarda Alba (La casa de Bernarda Alba, 1936). Just after the outbreak of the Spanish Civil War in 1936 he was murdered at Granada by Nationalist partisans, in mysterious circumstances.

GOR004246608
9780141185828
0141185821
Poet in New York by Federico Garcia Lorca
Federico Garcia Lorca
Penguin Modern Classics
Used - Very Good
Paperback
Penguin Books Ltd
20020131
304
N/A
Book picture is for illustrative purposes only, actual binding, cover or edition may vary.
This is a used book - there is no escaping the fact it has been read by someone else and it will show signs of wear and previous use. Overall we expect it to be in very good condition, but if you are not entirely satisfied please get in touch with us
Trustpilot