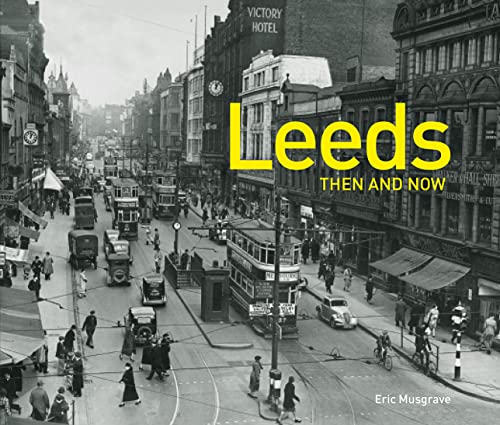 Leeds Then and Now by Eric Musgrave

Using archive photos from the 1860s to the 1960 paired with a modern viewpoint, Leeds Then and Now shows how the great northern powerhouse has retained and adapted its classic Victorian buildings, such as Kirkgate Market, to a 21st-century economy.

Leeds Then and Now by Eric Musgrave

The centre of Leeds is the wide thoroughfare of Briggate and it has been since at least 1207 when the path northwards from the crossing over the River Aire - literally the bridge gate - was established. As with most settlements, Leeds started out as dwellings next to the water. The first mention of Leeds was made by the scholarly monk The Venerable Bede in his Ecclesiastical History of the English People of 731 AD when he referred to the region of Loidis, but he was scant on details.

The modern Leeds is a product of the Industrial Revolution, a great Victorian northern industrial city shaped by the manufacturing boom that began in the late 18th century and employed thousands of people for almost 200 years in industries like textiles, clothing manufacturing, metalworking and engineering.

Using historic images, some dating back to the 19th century, paired with their modern-day viewpoint, Eric Musgrave charts the evolution of the city from its industrial heyday through the disruptions of two world wars, to its position as one of the most prominent of the northern powerhouses.

'A fascinating photographic exploration of a thriving city'

'Works as a testament to a grown-up city that's comfortable in its own skin.'

'A fascinating new book... which reveals what Leeds city centre looked like more than 100 years ago'

'Whether you were born in Leeds, live or have lived in the city or have just arrived here, this is the book for you... a great coffee table book [that] will evoke memories and a few laughs.'

* The Leeds Guide *
Eric has written about fashion for 25 years. An award-winning editor-in-chief of DRAPERS, the UK's top fashion business weekly, he has also held senior roles at MEN'S WEAR, INTERNATIONAL TEXTILES (Amsterdam), FASHION WEEKLY and SPORTSWEAR INTERNATIONAL (Milan). He was the launch editor of men's style mag, FOR HIM MAGAZINE (now FHM). He is now a consultant to the fashion business and writes for many publications.
NPB9781911595915
9781911595915
1911595911
Leeds Then and Now by Eric Musgrave
Eric Musgrave
Then and Now
New
Hardback
HarperCollins Publishers
2019-07-04
144
N/A
Book picture is for illustrative purposes only, actual binding, cover or edition may vary.
This is a new book - be the first to read this copy. With untouched pages and a perfect binding, your brand new copy is ready to be opened for the first time
Trustpilot