The Ring of Five Trilogy: The Unknown Spy Eoin McNamee 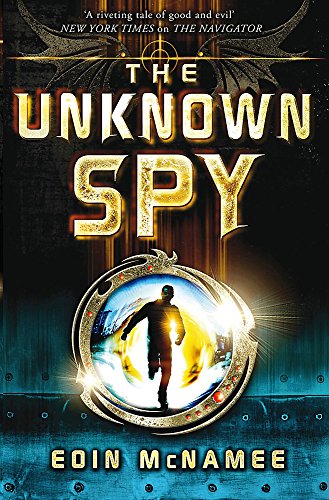 The Ring of Five Trilogy: The Unknown Spy by Eoin McNamee

Danny is a trainee spy from the Upper World. His mission: to save it from the Lower World, run by the devious Ring of Five.

The Ring of Five Trilogy: The Unknown Spy: Book 2 by Eoin McNamee

In Book Two in the Ring of Five trilogy, Wilsons Spy Academy has called back their most brilliant trainee spy: Danny Caulfield.

Danny is to be sent on an urgent mission: to find the treaty stone that protects the Upper World before the Ring of Five, leaders of the Cherbs, destroy it and wage war.

Danny and his friend Dixie - a spy who can appear and disappear at will - must set off the Kingdom of Morne to save the stone. But the Cherb children have got there first, and the King of Morne pits Danny against them in a contest for the stone. Lily, a Cherb, reveals to Danny that she is his sister: she urges him to join the Ring of Five with her.

Danny is locked into a battle between the two worlds and with himself. Who's side is he on? Wilsons or the Ring of Five? And how much can he truly trust Lily?

A high-stakes spy adventure, complete with double crossings, brilliant spy inventions, and a hero who has everything to learn about who he really is.

'captures the reader's attention from the opening paragraph ... The ending will leave the reader looking forward to the final volume of this trilogy with anticipation' Inis. * Inis *
Eoin McNamee's first children's book THE NAVIGATOR has received critical acclaim in the US and the UK. His adult books have been shortlisted for the Irish Times Literature Prize and twice longlisted for the Man Booker Prize. He has lived in London, Dublin and New York and is now settled in Sligo on the west coast of Ireland.
GOR003245242
9780857381293
0857381296
The Ring of Five Trilogy: The Unknown Spy: Book 2 by Eoin McNamee
Eoin McNamee
The Ring of Five Trilogy
Used - Very Good
Paperback
Hachette Children's Group
2011-03-03
416
N/A
Book picture is for illustrative purposes only, actual binding, cover or edition may vary.
This is a used book - there is no escaping the fact it has been read by someone else and it will show signs of wear and previous use. Overall we expect it to be in very good condition, but if you are not entirely satisfied please get in touch with us
Trustpilot