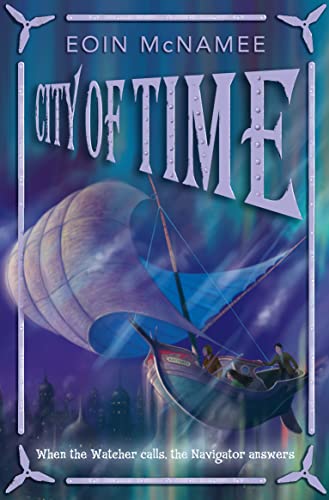 City of Time by Eoin McNamee

The world is in peril. There's not enough time. The Navigator is needed once again...

City of Time by Eoin McNamee

The world is in peril. There's not enough time. The Navigator is needed once again...

A year has passed since Owen said goodbye to Cati and relinquished his role as the Navigator, leaving the Resisters asleep on their island in time. But despite the victory over the marauding Harsh, Owen's everyday life is still tainted by the enervating stupor affecting his mother.

But gradually Owen becomes aware that strange occurences are happening around the world- meteorological events which don't seem quite natural. And when he spies the vile Johnston snooping around the old Warehouse he suspects that villainy is afoot.

When the Watcher summons, he knows he is needed, and reuinited Cati and Dr Diamond, they set off for the City of Time in search of a means to save the world.

Eoin McNamee was born in County Down, Northern Ireland. He is critically acclaimed as an adult novelist, the best known title being Resurrection Man (`one of the most outstanding pieces of Irish fiction to come along in years' Irish Times) which was also made into a film. He was awarded the Macauley Fellowship for Irish Literature in 1990. In addition to his literary novels, Eoin has written two thrillers under the pseudonym John Creed.

GOR002750352
9780007209798
0007209797
City of Time by Eoin McNamee
Eoin McNamee
Used - Very Good
Paperback
HarperCollins Publishers
2008-01-07
320
N/A
Book picture is for illustrative purposes only, actual binding, cover or edition may vary.
This is a used book - there is no escaping the fact it has been read by someone else and it will show signs of wear and previous use. Overall we expect it to be in very good condition, but if you are not entirely satisfied please get in touch with us
Trustpilot