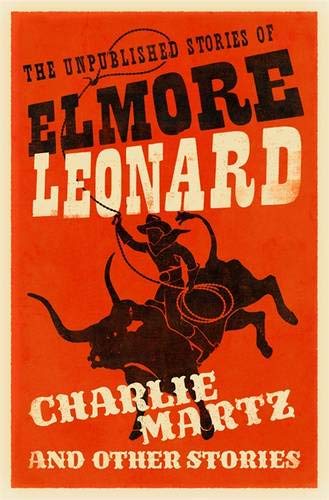 Charlie Martz and Other Stories by Elmore Leonard

When Elmore Leonard died in 2013, he left behind a 60-year legacy of crime novels, many of which have become modern classics. He also left behind a treasure trove of unpublished early stories.

Largely written during his years as a copywriter at a Detroit advertising agency, these stories find Leonard exploring far-flung locations, from the bars of small-town New Mexico to a military base in Kuala Lumpur. They also introduce us to unforgettable Leonard characters, some of whom - like ageing lawman Charlie Martz and former matador Eladio Montoya - star in his other works but were born in these pages.

Whether embodying an extra on a movie set in Spain or a desperate man out for vengeance in Detroit, these stories are endlessly entertaining - revealing a master who honed his craft from a young age, and reminding us why Leonard is so sorely missed.

would make a very nice Father's Day present. Hint, hint... * THE HERALD *
(the stories) have all the hallmarks of his later career: the laconic authorial voice, the shady characters, the seedy dives. * THE TIMES *

Elmore Leonard was born in New Orleans in 1925. He wrote forty-five books during his phenomenal career, including the bestsellers Mr Paradise, Tishomingo Blues, Be Cool and The Hot Kid. Many have been made into successful movies, including Get Shorty with John Travolta, Out of Sight with George Clooney and Rum Punch, which became Tarantino's Jackie Brown. He is the recipient of the Cartier Diamond Dagger Award and the PEN USA Lifetime Achievement Award. He died in 2013 in Detroit.

GOR006741176
9780297609797
0297609793
Charlie Martz and Other Stories: The Unpublished Stories of Elmore Leonard by Elmore Leonard
Elmore Leonard
Used - Very Good
Hardback
Orion Publishing Co
20150618
320
null null null null null null null null null null
Book picture is for illustrative purposes only, actual binding, cover or edition may vary.
This is a used book - there is no escaping the fact it has been read by someone else and it will show signs of wear and previous use. Overall we expect it to be in very good condition, but if you are not entirely satisfied please get in touch with us
Trustpilot