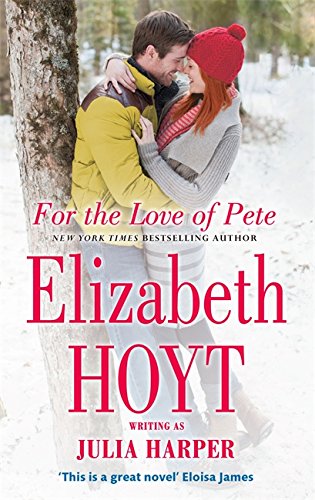 For the Love of Pete by Elizabeth Hoyt

For the Love of Pete by Elizabeth Hoyt

Dante Torelli is an undercover FBI agent assigned to protect a mob informant and his family. But when the informant's hiding place is blown, a baby girl is snatched by a ruthless hitman. Now, Dante must save the toddler, uncover the traitor in his department, evade various bad guys, and deal with the toddler's sexy aunt, all before the biggest mob trial in Chicago history, set to begin in just three days.

When Zoe Adler's stepsister went into the witness protection program because of her sleazeball boyfriend, she wasn't supposed to tell anyone. Except the two sisters have always been close, and Zoe has been babysitting her niece, Pete, since her birth. What harm could it be to secretly get Zoe an apartment in the same building where the FBI is keeping the family under protection? So when someone inside the FBI turns and a hitman snatches Pete, Zoe is right there. During the shootout, she jumps into a sexy, uptight FBI agent's car and hangs on as he pursues the hitman. No matter what it takes, Zoe is going to bring her niece back.

'Elizabeth Hoyt's historicals are hot, and her contemporaries deserve the same label. This is a great novel.' - Eloisa James

Elizabeth Hoyt's historicals are hot, and her contemporaries deserve the same label. This is a great novel. - Eloisa JamesFast paced and funny, this novel reads like Janet Evanovich crossed with The Sopranos. - RT Book Reviews
Elizabeth Hoyt is the New York Times bestselling author of over seventeen lush historical romances including the Maiden Lane series. Publishers Weekly has called her writing "mesmerizing." She also pens deliciously fun contemporary romances under the name Julia Harper. Elizabeth lives in Minneapolis, Minnesota, with three untrained dogs, a garden in constant need of weeding, and the long-suffering Mr. Hoyt.
GOR010652087
9780349408590
0349408599
For the Love of Pete by Elizabeth Hoyt
Elizabeth Hoyt
Used - Like New
Paperback
Little, Brown Book Group
2015-02-24
400
N/A
Book picture is for illustrative purposes only, actual binding, cover or edition may vary.
The book has been read, but looks new. The book cover has no visible wear, and the dust jacket is included if applicable. No missing or damaged pages, no tears, possible very minimal creasing, no underlining or highlighting of text, and no writing in the margins
Trustpilot