Off to Market Elizabeth Dale 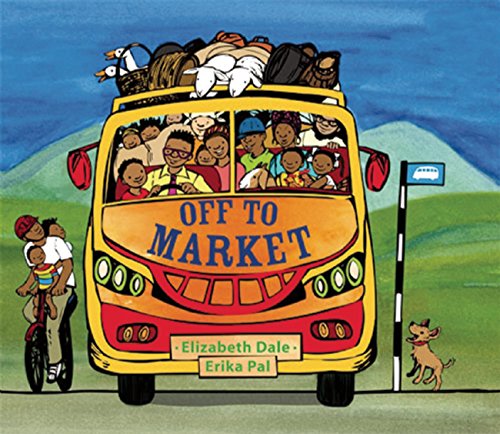 Off to Market by Elizabeth Dale

Hop aboard Joe's bus on its way to the market!

Off to Market by Elizabeth Dale

Hop on board the market bus! Everyone wants a ride and soon it's full to the top. But when the bus reaches a steep hill it just can't go any further. How will they lighten the load? Little Keb has the answer, proving that even the smallest person can make a big difference.

`vibrant rhyme, bursting with colour and begging to be read aloud.'

` vibrant rhyme, bursting with colour and begging to be read aloud.'

ELIZABETH DALE studied physics and worked for many years in the health service. After her three daughters were born, she was re-introduced to children's books. Elizabeth lives in rural West Sussex. She has had over 1600 stories (teenage and adult) published all over the world, and has children's books published for Bloomsbury, Egmont, Andersen, Simon and Schuster and others.

ERIKA PAL was born in Budapest. She worked in an animation film studio, before relocating to the UK with a dream of becoming a freelance illustrator. During her Animation and Illustration degree at London's Kingston University, she was twice highly commended for the Macmillan Prize, and won the national competition for Booktrust's Big Picture logo. After graduation, her first picture book, Azad's Camel was published by Frances Lincoln, followed by I See the Moon and Little Lion. Erika currently lives in London and her other interests are printmaking and experimental animation.

GOR006989674
9781847804389
1847804381
Off to Market by Elizabeth Dale
Elizabeth Dale
Used - Very Good
Paperback
Frances Lincoln Publishers Ltd
2014-01-02
32
N/A
Book picture is for illustrative purposes only, actual binding, cover or edition may vary.
This is a used book - there is no escaping the fact it has been read by someone else and it will show signs of wear and previous use. Overall we expect it to be in very good condition, but if you are not entirely satisfied please get in touch with us
Trustpilot